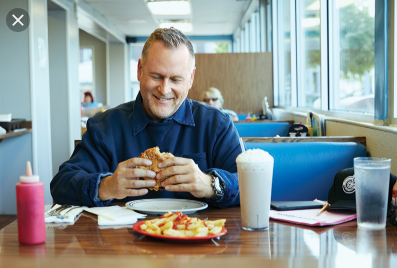 When Dave Coulier walks into Travis Coffee Shop, he fits in with the regulars. Perhaps, in this case, it’s because he is one. Growing up in St. Clair Shores, he fondly recalls the neighborhood burger joint and its greasy-spoon charm. And, throughout his last few decades living in Los Angeles, where he made a splash as an actor, comedian, and now, director, the diner was one of the first places he’d stop when he was back home.

Today, a warm July afternoon, Coulier is being photographed by his wife, Melissa, 36. Between shots and mouthfuls of his burger and ketchup-soaked fries, Coulier politely chats and jokes with the diner’s patrons, some of whom are peering around their booths to eyeball the Hollywood-esque scene. Things are much different for Coulier during a typical visit to the family-owned eatery. Gone are the photo crew, the stylist, and the camera-ready makeup. On a normal stop at Travis, Coulier simply picks up a carry-out order and swings by his dad’s place to drop off food.

His father still lives in the house where Coulier and his four siblings grew up. Situated on a tree-lined street, the St. Clair Shores home is where Coulier was born in September 1959. It’s where he took slapshots in the driveway, his love for hockey and the Red Wings starting young. It’s also where he began to dream about a future outside of St. Clair Shores, one where the pursuit of comedy amounted to more than being the “funny kid in class.”

Long before moving out to Los Angeles in 1979, his time on the Hollywood standup circuit, his voice-acting gigs, and landing his star-making role as the lovable uncle Joey Gladstone on Full House (and later reprising his character in Fuller House), Coulier was simply that: the funny kid. The locker room roared with laughter as he told jokes to his hockey teammates. He perfected his comedy acts when he took over his high school’s morning announcements with a dead-on impression of his principal’s nasally Midwestern voice. Coulier says his childhood “partner in crime” was Mark Cendrowski, who would later find his own success in Hollywood as the director of the Big Bang Theory. The duo, who met in the third grade, worked toward their dreams of being “professional funny people,” he shares. They drew comic strips, listened to George Carlin comedy albums, and later, created short films with an 8mm-camera provided by Cendrowski’s father.

While Coulier’s career shot him to Hollywood stardom, it’s in his hometown where he feels most at peace. “I’ve always been in love with this part of the world,” he says. “I find that I’m drawn to Lake St. Clair.” It’s this draw that has Coulier making a bold move: At 60 years old, nearly four decades after decamping for Los Angeles, the funny kid’s coming home to metro Detroit.