Past industry leaders John Davey and Henry Ford have something in common:
They’re innovators.

Although Henry and Clara Ford did not seek to build a lavish home, the nature lovers did pay a great deal of attention to design of the landscape. Many trees and other native plants found a new home in several areas of the property, creating the private nature haven the Fords sought.

The couple settled into their new home by 1915. But evidence within the woodwork of one ancient tree on the site suggests The Davey Tree Expert Company was there first.

A huge bur oak tree located on the lower landscape level of Fair Lane, near the Rouge River in Dearborn, stands within one of many prairie openings among the Michigan forests.  It is believed that Native Americans once camped in this opening.  The bur oak also served as a centerpiece in the Ford’s vegetable garden until the garden’s removal when Mrs. Ford’s died in 1950.

The bur oak tree is a living witness to the property’s past. In fact, it was among 21 American trees and plantings to be recognized by The Cultural Landscape Foundation’s “Landslide” program as a “Hero of Horticulture” in 2007.

Today, the approximately 300-year-old bur oak stands roughly 65 feet tall and nearly 16 feet around as one of the few remaining bur oak trees of its age in southeast Michigan. 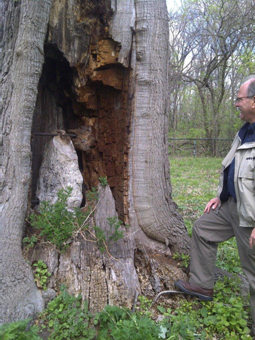 A recent storm confirmed Davey’s presence on the property more than 100 years ago when a portion of the bur oak’s trunk was broken, revealing a cement-filled cavity bolted within the trunk.   The physical evidence supported the written records found by Davey.

Because Davey was one of the first tree care companies to perform cavity fillings in the early 1900s, both South Detroit Sales Arborist Tom Holden and District Manager Tom Swearingen assume Davey performed the work.

“Cavity filling is really interesting,” Holden says.  Europeans introduced this technique to the United States in the beginning of the 20th century. Today, tree cavities are best treated by leaving the cavity open and taking other measures to help improve the overall health of the tree.

IN THE PUBLIC EYE

Today, the estate welcomes visitors to enjoy the gardens and grounds, making landscape maintenance and preservation even more important. “I feel privileged to be taking care of the trees Ford planted way back then,” Holden says. “Now, they’re huge trees – about 100 years old – but they’re part of the original design, which is interesting.”

Nearly 100 years after the Fords began calling Fair Lane their home, the legacies of Davey and Ford remain relevant within their respective industries. Ford’s interest in nature survives within the nature preserve and hiking trails that exist on the property. As Holden says: “It’s a really beautiful landscape.”

The Davey Tree Expert Company, with U.S. and Canadian operations in more than 47 states and five provinces, provides a variety of tree care, grounds maintenance and consulting services for the residential, utility, commercial, and government markets. Founded in 1880, Davey has been employee owned for 35 years and has more than 7,300 employees who provide Proven Solutions for a Growing World. For more information, visit www.davey.com.