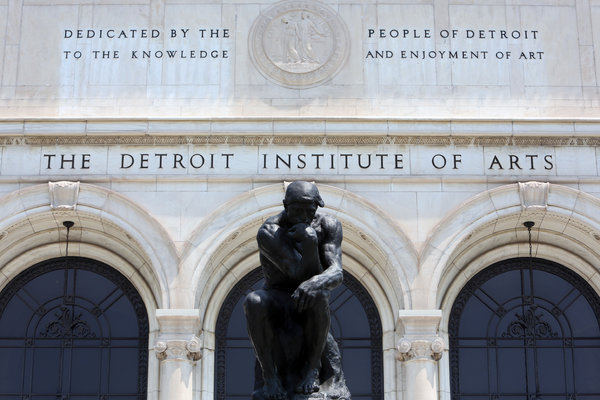 Detroit’s pensioners must agree to the proposed deal, which would leave them with far less than the $3bn they are owed
The collection of the Detroit Institute of Arts (DIA) is one step closer to safety. On Wednesday, the DIA announced plans to raise $100m over the next 20 years as part of a grand bargain to protect the museum’s art collection and shore up Detroit’s ailing pension funds.

The $100m would essentially fund a “buy-back” of the museum’s collection from the city of Detroit. In exchange for its contribution, the DIA would receive clear and irrevocable title to its entire art collection, museum building and all related city-owned assets. The museum would terminate its operating agreement with the city and become an independent non-profit. “The DIA would not be, as it has been since 1919, tied to the fortunes of the city of Detroit,” says the museum’s director Graham Beal.

The commitment is an about-face for that institution that said last month it would be unable to raise $100m. The funds are now expected to come from a combination of corporations and individuals based in southeast Michigan that “have not for the past decade contributed to the DIA but have a deep interest in the future of Detroit”, Beal says.

The DIA’s contribution brings the total amount pledged to support pensions and protect Detroit’s art to $820m. Over the past month, ten national and local foundations have promised to contribute $370m, while the governor of Michigan offered $350m.

The money raised by the DIA will not directly benefit the museum. Instead, the funds will be transferred to a third party that will use them to make pension payments. “This is a completely discrete campaign that runs alongside our campaign to raise money for the endowment and money to operate the DIA,” Beal says. The museum will continue to receive $22m annually from a series of local property taxes approved in 2012. It also plans to raise an additional $12m-$14m each year to finance operations.

Despite the $100m pledge, the DIA is not out of the woods yet. Several obstacles remain before it can claim full ownership of its collection. First, the Michigan state legislature must approve the governor’s $350m pledge. Second, pensioners must agree to the deal, which would leave them with far less than the $3bn they are owed. Finally, the bankruptcy judge must approve the agreement. “The big conundrum in bankruptcy is always, ‘Do you want less now or do you want to gamble for more later?’” Beal says.