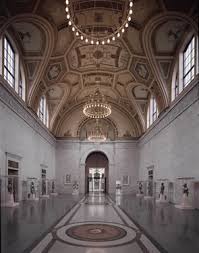 Visitors can play detective as art and science come together

Detroit, MI – Fakes, Forgeries, and Mysteries, on view at the Detroit Institute of Arts (DIA) Nov. 21, 2010–April 10, 2011, takes visitors behind the scenes to reveal how art experts and scientists determine if a work of art is authentic, fake, a forgery, or if the evidence is inconclusive to make a determination.
The exhibition will highlight some of the mistakes and other discoveries made through the years regarding artist attribution, authenticity and value of works in the collection. Visitors will see how the DIA constantly re-assesses artwork through research, science and technology, revealing an aspect of the museum’s function rarely seen by the public. The exhibition has been organized by the DIA. Generous support has been provided by Chase.
“The DIA has been collecting and displaying art for more than 125 years,” said Graham W. J. Beal, DIA director. “And alongside the many masterpieces found in the tens of thousands of works of art we have acquired, there are some that are not what they were thought to be at the time they were acquired. This exhibition shows how ongoing scholarship and scientific research refines and clarifies our understanding of what we are looking at.”
The show includes 60 paintings, sculptures, photographs, prints, drawings and decorative arts  that either are or claim to be from diverse cultures—European, African, American, Asian, Islamic, Coptic and Ancient Near Eastern. This diversity of objects provides opportunities to explore issues such as who really created a particular work of art, when it was made, if it is authentic or fake, or remains a mystery at the DIA.
Fakes, Forgeries, and Mysteries begins with a gallery that displays works that were once attributed to a certain artist or culture but have been re-evaluated based on new findings. They have been re-categorized as either “copies,” which replicate original artworks, or as “in the style of,” which follows the artistic manner of another artist or culture. These are different from forgeries, because they were not created to deceive.
The next section displays known forgeries, with explanations on how the museum came to that conclusion. Forgers imitate the style of an artist or culture and try to convince buyers of the object’s authenticity. Sometimes unscrupulous dealers add the forged signature of a well-known artist to an already existing artwork to entice buyers. In some cases, forged works will be
displayed next to authentic works so visitors can see for themselves the different characteristics and clues that led the DIA to determine they were fakes.
The last section contains ongoing “mysteries.” Curators have researched files and analyzed brushstrokes to see if the style of an object accurately represents that of a particular artist. Conservators have cleaned artworks to reveal clues beneath the accumulated surface dirt. Paint and canvas threads have been tested by scientists to validate a work’s authenticity. Despite these efforts, the objects remain puzzles that require further analysis. Each artwork in this section has a “next step” that explains what the museum will be doing to get closer to solving the mystery.
“Even if they turn out to be forgeries, these objects would be crucial scholarly tools used to identify other forgeries,” said Salvador Salort-Pons, DIA associate curator of European paintings and curator of the exhibition. “We may also discover a few authentic works by well-respected artists. For the museum, the importance of these discoveries would lie in the enhanced artistic quality of our collection.”
To help bring the connection between art and science to life, Fakes, Forgeries, and Mysteries will feature a hands-on lab with interactive activities and opportunities for discovery. Kids will enjoy using clues and magnifying glasses to try their hand at solving mysteries. Visitors can also conduct their own investigations using pigment analysis, dendrochronology (using tree rings to date wood), and x-ray images, giving them a real sense of what goes on behind the scenes.
Tickets
$12 for adults, $6 for ages 6–17, and free for DIA members.
Tickets include museum admission and a cell-phone tour featuring DIA Director Graham Beal.
The cell phone tour is free, but users will be charged for minutes per their individual cell phone plan.
Museum Hours and Admission
10 a.m.–4 p.m. Wednesdays and Thursdays,
10 a.m.–10 p.m.Fridays,
10 a.m.–5 p.m. Saturdays and Sundays.
Admission is $8 for adults, $6 for seniors, $4 for ages 6–17, and free for DIA members.
For membership information call 313-833-7971.
DIA Website