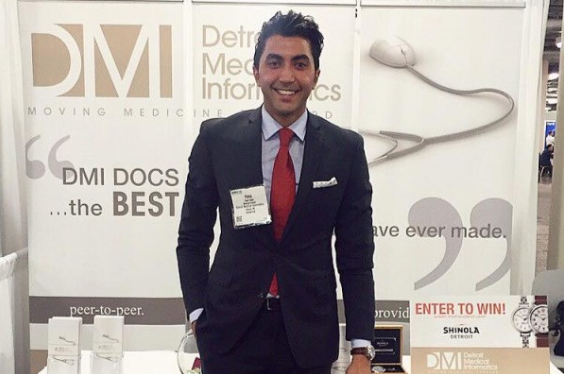 Sometimes it takes a doctor to teach a doctor. As a medical student and cardiovascular fellow in Michigan, Hass Saad, M.D., saw an obvious flaw in hospitals and health systems trying to roll out electronic health record technology without properly communicating to physicians and expecting them to change their medical processes to Cerner, Epic, McKesson and Meditech, four of the major EHR systems that hospitals use.

“In 2013 and 2014, a lot of hospitals were going from paper medical records to electronic health records,” said Saad, founder and CEO of Detroit Medical Informatics Inc., a health care IT consulting firm. “The industry offers lots of tech support. They would try to communicate (with doctors and not always be understood).

“In 2014, Saad graduated with a medical degree from Windsor University School of Medicine. He became a cardiovascular research fellow at Metro Health in Wyoming from July 2014 to February 2015.  During that time, working 16 hours a day during his training, Saad said he saw a “lot of disservice to the practice of medicine” when the electronic health records were being rolled out.

Because he understood computers and what they could do for medicine, Saad realized he was more interested in the growing field of medical information technology. He felt he could bring his medicine and science understanding to the administrative side of health care.

In 2015, Saad launched Detroit Medical Informatics, He said. “I reached out to a lot of doctors who were interested in IT and started my first project in Baltimore (at the University of Maryland Medical Center) in 2015.

“Now, DMI, which focuses on directly supporting physician quality support, counseling, customization and optimization of EHR systems, has four full-time workers and more than 300 physician consultants nationally representing many different clinical specialties. The company generated between $4 million and $6 million in revenue in 2017 and 2018, and it is growing this year, Saad said.

“The idea behind DMI is to get doctors to be part of the change at hospitals,” Saad said. “We have been dubbed the ‘physician whisperers.’ We can bridge the gap between health care and technology and communicate with doctors at their level.”