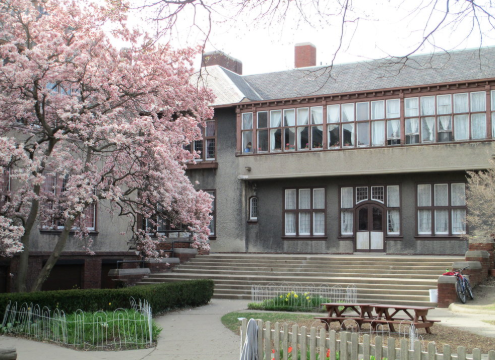 Henry Heaselgrave painstakingly colors the feathers of the kingfisher bird a bright blue.

More precisely, “It’s a belted kingfisher. We’re studying birds right now,” said Henry, 9, motioning to one of the bulletin boards filled with colorful birds in his third-grade classroom at Detroit Waldorf School. He’s making sure his drawing is accurate because it’s a handmade postcard being sent to another Waldorf school almost 4,000 miles away in Lima, Peru.

It is part of a worldwide postcard exchange project celebrating a century of Waldorf education. Thousands of students ages 6 to 18 are connecting with students in 1,100 Waldorf schools from more than 80 countries, The Detroit News reported.

So far, more than 700 postcards have been mailed out from Detroit Waldorf School, and 300 have arrived from six continents and more than 35 countries. Some of the postcards are displayed in three separate sections of the school and are geographically divided into Africa/Europe, the Americas and Asia/Australia.

Henry of Detroit, who said he’d like to be either a plumber or an archaeologist when he grows up, added a black tip to the wings. “When they receive it, I hope they like it,” he said. He was one of 27 students in Justin Trombly’s class on a recent afternoon.

Students with heads bent over their art creations colored with square crayons made from beeswax. Trombly said the project began last year and will continue through September when the 100th year of Waldorf education is commemorated.

“Students learn that children around the world are learning some of the same things, including farming, gardening and house-building,” Trombly said.

Paris Terry, 9, of Southfield, highlighted those house-building skills on his postcard. “I’m working on dwellings, so I’m drawing a wigwam,” he said. The postcard was addressed to Western Cape, South Africa. “I know some people who live there, and they’re doing the same thing,” said Paris, who would like to be an actor when he grows up. “This helps us connect to students around the world, and I like to see what they’re working on in their postcards.”

Noah Marrocco, 9, of Chesterfield Township, was sending his postcard closer to home, to Meadow Vista, California, about 2,300 miles away from Detroit. He was drawing an American flag on a colorful background.“I tried to make it a rainbow background,” he said. “It’s just exquisite to me, and I hope they know I put a lot of work into this, and I hope they really like it.”

Students at Waldorf Detroit learn both Spanish and German, beginning in the first grade and continue through eighth grade. The Waldorf approach to education was created by Rudolf Steiner and launched in 1919. It offers a curriculum in academics, arts, music and physical education in a historic Albert Kahn building erected in 1913 and surrounded by estates in Detroit’s Indian Village.

The private school education is offered to a geographically, racially and socio-economically diverse student body.

Click here for more at the Source: http://www.thealpenanews.com/wire/ “Detroit students send postcards around the world”