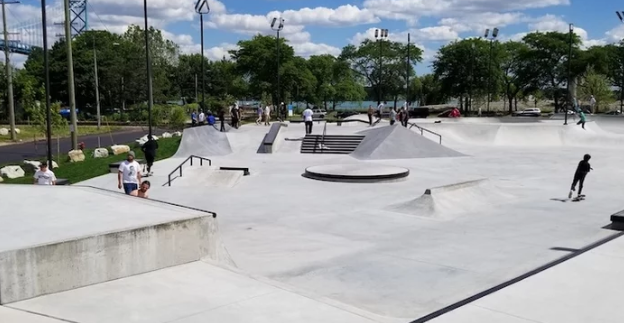 Riverside Park’s multiyear revitalization has cut the ribbon on its latest addition: a new 15,000-square-foot skatepark. With the Ambassador Bridge looming in the background, the waterfront facility—designed by Seattle-based Grindline Skateparks—is arguably one of the most picturesque places to skateboard in the city.

The Riverside Park revamp was made possible by a 2015 Land Exchange Agreement in which the Detroit International Bridge Company demolished the former Detroit News Warehouse and transferred the five-acre parcel to the city to expand the waterfront green space. Funding for the $800,000 skatepark came from the city as well as the Ralph C. Wilson and Tony Hawk foundations.

Riverside Skatepark joins earlier improvements including new basketball courts, soccer fields, and a dog park. Work on the next phase—which calls for an sledding hill, boat launch, and splash pad—isn’t scheduled to begin until next summer, according to the city.