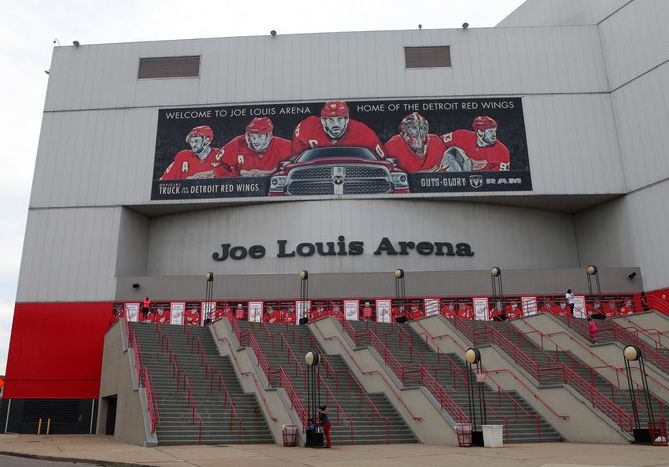 announced details surrounding the “Farewell Season at The Joe” campaign as the organizations prepare to embark on their final season (2016-17) at Joe Louis Arena. The campaign will celebrate many of the historic Red Wings games and entertainment acts that have been held at Joe Louis Arena in the building’s illustrious 38-year history.

“The Joe will always hold a special place in our hearts,” said Tom Wilson, President and CEO of Olympia Entertainment. “Our fans will never forget the championships won on the ice and witnessing once-in-a-lifetime performances on the stage. We know our fans have cherished memories of nearly four decades here at The Joe, and we’re excited to celebrate and relive those moments one last time as we continue preparation for the future at the Detroit Events Center.”

As a part of the season-long celebration, Olympia Entertainment’s marketing and communications team created a commemorative event logo that will have a wide variety of uses. First and foremost, the commemorative logo will be worn on all Red Wings uniforms for the 2016-17 season. Merchandise opportunities are currently being planned as well as special commemorative co-branding initiatives with corporate partners. A subtle reminder of the team’s championship success at the venue is depicted by four stars placed beneath the “Farewell Season” phrase, each representing one of the Stanley Cup Championships won by the Red Wings during the team’s tenure at The Joe.

A preliminary list of elements set to be included in the campaign can be found below:

Joe Louis Arena has served as the Red Wings home ice for four Stanley Cup Championships (1997, 1998, 2002, 2008) and the team’s current run of 24 consecutive seasons qualifying for the Stanley Cup Playoffs (1990-91 – present), the longest active streak in all of North American major professional sports. The Red Wings have compiled an NHL-best .639 home winning percentage (803-412-119-69) at Joe Louis Arena and locked up the organization’s milestone 800th win at The Joe this season on Dec. 20, 2015 against the Calgary Flames. Additionally, the Red Wings are in the midst of a 217 game sell-out streak at The Joe dating back to Dec. 19, 2010.

As well as housing the Red Wings, Joe Louis Arena has hosted countless entertainment acts from some of the biggest names in the industry. Aerosmith, Justin Bieber, Garth Brooks, Zac Brown Band, Cher, The Eagles, Elton John, Kid Rock, Paul McCartney, Pearl Jam, Rihanna, Bob Seger, Justin Timberlake, The Who, Stevie Wonder and many more have all graced the stage at Joe Louis Arena. Numerous shows and entertainment acts for the whole family have also been held at The Joe, including college hockey, ice shows, circuses and much more.

Additional detail regarding specific programming will be announced at a later date.