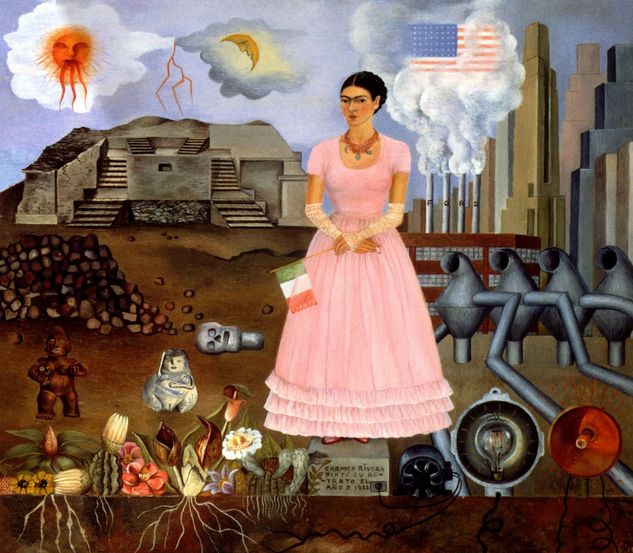 DETROIT — The Detroit Institute of Arts’s major exhibition Diego Rivera and Frida Kahlo in Detroit closes on Sunday. This show was in the works for a decade, long before the city’s bankruptcy and the grand bargain, which shifted the ownership of the art from the city to the museum. “It is also a serendipitous celebration of this exemplary museum’s hard-won independence,” Roberta Smith wrote in her New York Times review. The exhibition may underline the museum’s financial freedom from the city, but it is hard to ignore its other dependences — on a selective remembrance of modern US history and persistent nostalgia, a type of repetition compulsion.

The exhibition chronicles the city’s impact on the artists’ relationship and art in three chronological sections: before, during, and after their time in Detroit. Much of the show focuses on Diego Rivera’s “Detroit Industry” murals (1932–33) and the development of Frida Kahlo’s craft. “They kiss,” printed in large letters on a gallery wall, is the first thing visitors see upon entering the exhibition and sets the tone for the rest of the presentation. Further into that first room there is a photo to the right of “They kiss,” predictably of the couple embracing in the scaffolding of what is now known as Rivera Court. Audio guides are given out to everyone at this point, in a way that makes them seem obligatory rather than merely encouraged.