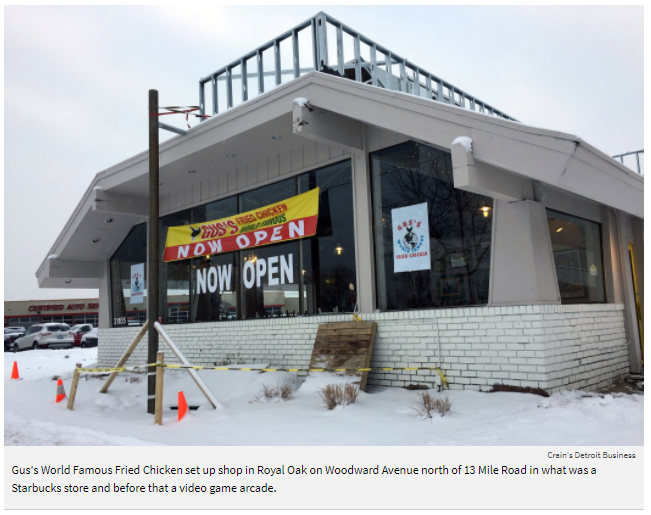 Gus’s World Famous Fried Chicken is open in Royal Oak.The Memphis-born spicy fried chicken chain has two other locations in metro Detroit: One in Detroit’s Midtown neighborhood and another in Westland.The third opened in an approximately 2,000-square-foot space at 31105 Woodward Ave. on Dec. 19, said Josh Humphrey, an operating partner in Schmaltz Hospitality LLC.Schmaltz, which owns the three metro Detroit locations as a franchisee, spent about $350,000 building out the space. It was previously a Starbucks cafe.The operation now employs 30 and seats 46. Its building is free-standing, with its own parking lot and entrances from Woodward and 13 Mile Road.”Royal Oak seems like a really good fit for us,” Wendy McCrory, president of Gus’s Franchisor LLC, told Crain’s in August when the restaurant was announced. “It seems like we’re not going to be cannibalizing our other stores; it seems like we’re going to be capturing a whole different market of Detroit.”