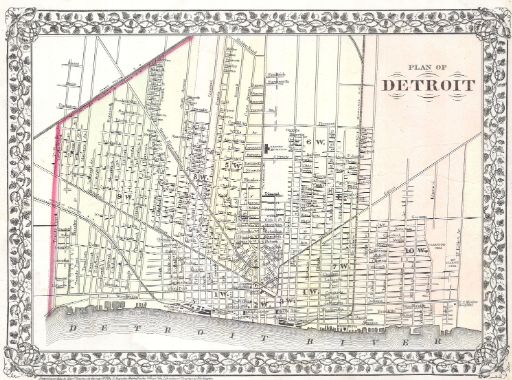 Detroit was founded in 1701 when Antoine de la Mothe Cadillac established a fort and settlement on the site. The name means “strait” in French, and is derived from the narrow river connecting Lake St. Clair with Lake Erie in Michigan. Control of the area passed to the British in 1760. It occupied such a strategic position that even though the British were obligated to cede it to the United States under the 1783 Treaty of Paris, they refused to give it up until 1796.

Detroit was incorporated as a village in 1802 and became the seat of government for the Michigan Territory when it was formed from the Northwest Territory in 1805. Detroit was completely destroyed by fire in the same year, which gave the citizens the opportunity to re-platt the land in a better manner afterwards.

When the War of 1812 broke out, Detroit’s position was indefensible and the city surrendered to the British on August 16, 1812. General Harrison’s attempt to recapture Detroit the following January failed, but after Commodore Perry’s victory on Lake Erie in September and Harrison’s victory at the Thames River in October, American control of Detroit was re-established after a little more than a year of British occupation. General Harrison renamed it Fort Shelby. It was retained after the war but gradually lost its military importance and was abandoned in 1823.