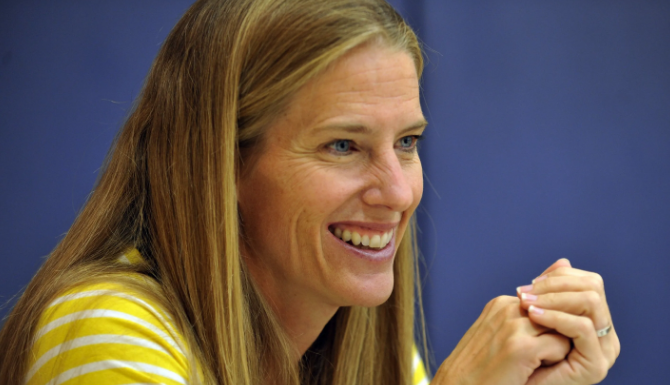 Kim Barnes Arico enters her seventh season as the head coach in 2018-19, guiding the Wolverines to at least 20 wins in each of her six seasons, two NCAA Tournament appearances and the 2017 WNIT Championship. She was announced as the ninth head coach in the history of the program on April 20, 2012.

Barnes Arico also eclipsed 400 wins for her career during the 2017-18 season, making her the seventh active Big Ten coach to reach the mark.

Barnes Arico was named the 2017 Big Ten Coach of the Year by the coaches and media, becoming the first consensus winner in school history.

Barnes Arico started her head coaching career at Fairleigh Dickinson-Madison, a Division III university in New Jersey. She led the Devils to a 13-11 record during the 1996-97 season before accepting the head coaching post at New Jersey Institute of Technology for two seasons (1997-99). Helping the program transition from Division III to Division II, Barnes Arico was named the New Jersey Coach of the Year after taking the program from the five-win total in her first season to 11 victories in year two.

A native of Mastic Beach, N.Y., Barnes Arico helped lead Stony Brook University to the 1989 NCAA Division III Tournament as a freshman. She spent her final three seasons at Montclair State University, serving as captain during her junior and senior seasons. Barnes Arico led the team to back-to-back ECAC Tournament appearances in 1991 and 1992 and was the team’s leading scorer both seasons. A scholar-athlete award recipient, Barnes Arico graduated from Montclair State in 1993 with a bachelor’s degree in physical education and health.

Barnes Arico went into teaching after graduation, accepting a position as a physical education and health teacher at the Academy of Saint Aloysius in Jersey City, N.J., during the 1993-94 academic year.