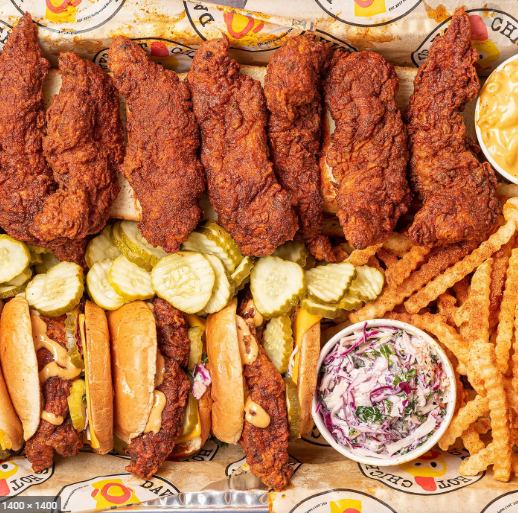 A rapidly expanding restaurant chain known for its Nashville-style hot chicken is setting the stage for a Midwest invasion. LA-based Dave’s Hot Chicken has signed a franchise agreement to bring an estimated 25 new locations to Michigan and Ohio.

Founded by Arman Oganesyan, David Kopushyan, and Tom and Gary Rubenyan back in 2017 as a late-night stand in East Hollywood, Dave’s Hot Chicken quickly grew a following. The sensation over the stand’s spicy chicken tenders and seasoned fries has since spawned multiple restaurants throughout LA County. With franchise agreements and the backing of celebrity investors including actor Samuel L. Jackson, former California First Lady Maria Shriver, and Good Morning America anchor/retired NFL player Michael Strahan, the chain is aiming to open 150 new locations across the U.S. including spots in Las Vegas and San Diego.

The chain is seeking real estate in Michigan and Ohio with opportunities for drive-thru service, per a release. Dave’s is focusing on Toledo and Dayton first and will then move on to Flint and Saginaw.