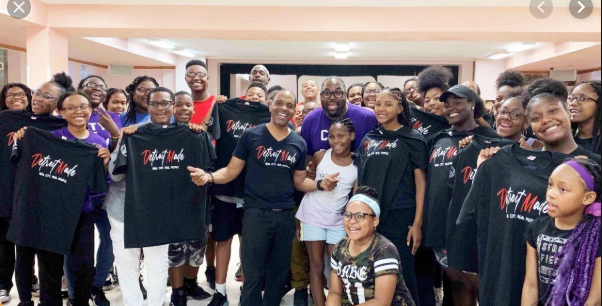 A Detroit-based clothing company is gifting the Detroit Youth Choir with T-shirts that help spread a positive message about Detroiters as the group retakes the national stage.

Detroit Made Inc. surprised the choir with a donation of 70 shirts as an appreciation gift for their impressive representation of Detroit on a national stage. DYC recently performed on NBC’s America’s Got Talent (AGT), earning a spot in the competition finals. The youth choir will be back on AGT on Tuesday.

“Our shirts make a statement,” said Detroit Made owner Erik Williams. “Our motto is Detroit Made — Real City. Real People. This donation is just a way to show how proud we are of young, talented, hard working individuals from our city who are committed to pursuing their passions and living their dreams. They are setting a great example for their generation.”

Williams felt prompted to make the donation after DYC performed at his church in Detroit. During that guest appearance, he met with the choir’s director, Anthony White, and learned that they share a similar vision of empowering lives.

“I wanted to show my personal support by sowing a gift into their lives,” said Williams.