“The biggest names in country and bluegrass have cut her stuff, from Tim McGraw and Sara Evans to Alison Krauss and Carrie Underwood, and more are knocking at her door…Country megastars such as Taylor Swift count themselves as huge fans.” -Boston Globe 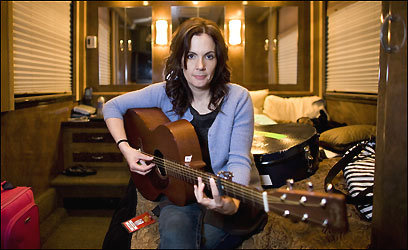 Critically acclaimed artist Lori McKenna is performing at The Ark in Ann Arbor, Michigan on Thursday, September 20 at 7:30PM. Tickets are available to the public at www.theark.org    (with special guest Mark Erelli).

Lori McKenna’s way of articulating the love, pain and pathos of domestic life into her soulful music have strongly impacted artists like Faith Hill and have contributed to Hill’s very public championing of Lori’s music. She recorded covers of 4 of McKenna’s songs on her 2005 album “Fireflies” — including the title track. In addition to Hill, Tim McGraw (who co-produced her 2nd album in 2007), Carrie Underwood, Alison Krauss, Keith Urban and LeAnn Rimes are among the many that have recorded her songs in recent years. She’s a big deal in Nashvillebut resides happily in Stoughton, Mass. with her husband and 5 kids. Her latest and sixth record is called Lorraine.

Lori McKenna’s first name is actually Lorraine. Now you know. She is named after the mother she lost when she was only seven, but whose impact on Lori’s life reverberates to this day. In Lorraine, McKenna considers the influence of her mother as well as her own place in relationship to her husband, family and community. It is her most personal album to date.

That Lori is a master at chronicling the small, difficult moments between romantic partners as they navigate their relationships is a big reason her songs have been so popular with other artists. Increased acclaim for her song craft also led to a record deal with Warner Brothers in 2007. She continues to tour America in support of her latest release.

LISTEN TO TRACKS FROM LORRAINE