“I Have a Dream” is a public speech delivered by American civil rights activist Martin Luther King, Jr. on August 28, 1963, in which he calls for an end to racism in the United States. Delivered to over 250,000 civil rights supporters from the steps of the Lincoln Memorial during the March on Washington, the speech was a defining moment of the American Civil Rights Movement.[1]

Beginning with a reference to the Emancipation Proclamation, which freed millions of slaves in 1863,[2] King observes that: “one hundred years later, the Negro still is not free”.[3] Toward the end of the speech, King departed from his prepared text for a partly improvised peroration on the theme “I have a dream”, prompted by Mahalia Jackson‘s cry: “Tell them about the dream, Martin!”[4] In this part of the speech, which most excited the listeners and has now become its most famous, King described his dreams of freedom and equality arising from a land of slavery and hatred.[5] Jon Meachamwrites that, “With a single phrase, Martin Luther King, Jr. joined Jefferson and Lincoln in the ranks of men who’ve shaped modern America”.[6] The speech was ranked the top American speech of the 20th century in a 1999 poll of scholars of public address.[7]

The March on Washington for Jobs and Freedom was partly intended to demonstrate mass support for the civil rights legislation proposed by President Kennedy in June. Martin Luther King and other leaders therefore agreed to keep their speeches calm, also, to avoid provoking the civil disobedience which had become the hallmark of the civil rights movement. King originally designed his speech as a homage to Abraham Lincoln‘sGettysburg Address, timed to correspond with the 100-year centennial of the Emancipation Proclamation.[5]

Speech title and the writing process

King had been preaching about dreams since 1960, when he gave a speech to the National Association for the Advancement of Colored People(NAACP) called “The Negro and the American Dream”. This speech discusses the gap between the American dream and reality, saying that overt white supremacists have violated the dream, and that “our federal government has also scarred the dream through its apathy and hypocrisy, its betrayal of the cause of justice”. King suggests that “It may well be that the Negro is God’s instrument to save the soul of America.”[8][9] He had also delivered a “dream” speech in Detroit, in June 1963, when he marched on Woodward Avenue with Walter Reuther and the Reverend C. L. Franklin, and had rehearsed other parts.[10] 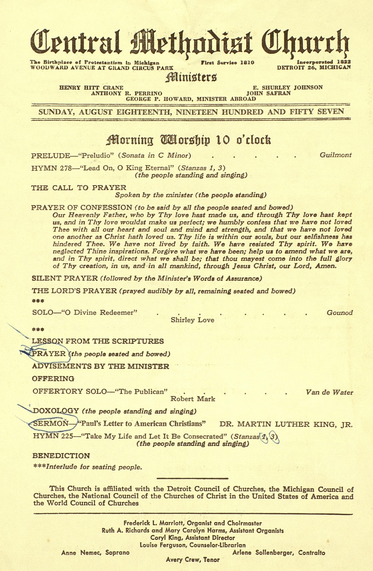