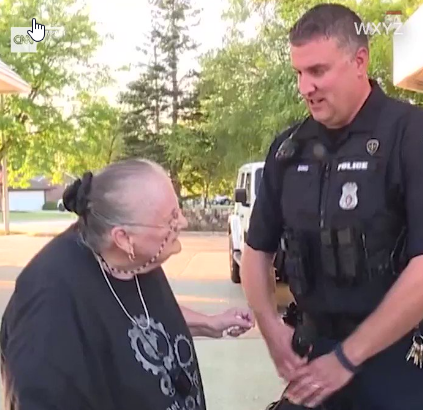 Seventy-five-year-old Delores Marotta used her cane to hobble into a metro Detroit gas station. She asked the attendant to put $3 on pump number three. A St. Clair Shores, Michigan, police officer overheard her request and surprised her by adding an extra 20 bucks of gas to her tank.

On August 31, Officer Todd Bing watched Marotta use a couple of crumpled up dollar bills and some quarters to pay for less than a gallon of gas.
“She was so slow-moving that I was like “I’m going to go pump this gas for her,” said Bing.
Marotta said she only had $3 until she received her next Social Security check and needed just enough gas to get to and from a doctor’s appointment.
Bing followed her to the pump and told her to wait in the car while he pumped the gas.
The two began to talk, and Marotta shared that her husband, James, had passed away in 2015, and explained how she’s been struggling to pay her property taxes, buy groceries and put gas in the car her daughter gave her. During the chat, Bing continued to pump.