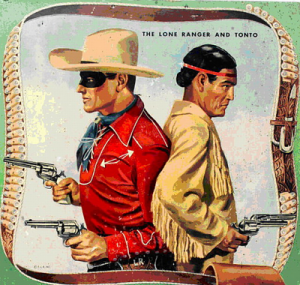 This Date in Native History: On January 30, 1933, The Lone Ranger debuted on the Detroit, Michigan, radio station WXYZ, introducing America to the legendary masked rider.

During the next 80 years, The Lone Ranger would appear in comic strips, television shows and movies, not to mention a vast array of merchandise including action figures, costumes, books and toy guns. The show also helped define the TV Western, inspiring dozens of other titles.

Based on the story of a solitary hero searching for truth and justice in the American West, The Lone Ranger quickly gained popularity and the masked man became one of the most endearing characters in history. The show began with the rousing fanfare from William Tell Overture and this invitation to return to the days of yesteryear: “A fiery horse with the speed of light, a cloud of dust and a hearty Hi-Yo Silver! The Lone Ranger!”

Shortly after the show premiered, writers realized they needed a second character, said Larry Zdeb, a radio historian in Troy, Michigan. The ranger’s sidekick, Tonto, appeared on February 25, 1933.
“The Lone Ranger kept talking to his horse,” Zdeb said. “They needed another character for him to talk to.”
First played by an actor named John Todd, Tonto communicated in stilted English and low, guttural groans. Much of his dialogue was limited to “Me go,” or “He come.”

Although he had shorter speaking roles and was portrayed in a very stereotypical manner, Tonto was “the brains behind the outfit,” Zbed said. “Without him, the show wouldn’t have made it.”

All the shows were done live, with the sound effects staff imitating the thunder of galloping hoofs by stamping rubber plungers into a trough of sand. The effect was mesmerizing for children and adults.
By 1939, the ranger, who at that time was played by Earle Graser, was one of the most famous voices in America. The Saturday Evening Post in October of that year reported that 20 million people listened to the show every Monday, Wednesday and Friday as it echoed from 140 stations. The Post called the ranger an idol and “the hero from whom all other heroes take fresh luster.” Grade-school teachers were looking over the novelized form of the episodes and celebrities from Shirley Temple to Eleanor Roosevelt were calling it their favorite show.

The character, who was the product of WXYZ owner George Trendle and writer Fran Striker, was a clean-living fellow. In a 1952 interview for TIME magazine, Trendle said his goal was to create a wholesome hero.

“Without detracting from the thrill and excitement, we try to convey a message that subtly teaches patriotism, tolerance, fairness and respect for the rights of all men,” Trendle told TIME.  At that point, the show was grossing $5 million per year.

The ranger had a list of things he had to do, Trendle said. He always spoke good English and was always on the side of law and order. The ranger never smoked, swore, drank, shot to kill, engaged in love affairs or used slang or bad grammar.

Tonto was held to the same moral standards, minus the grammar, said Michael Horse, an American Indian activist, artist and actor who played Tonto in the 1981 film The Legend of the Lone Ranger. Horse listened to the archived radio show when he was preparing for the role.

“There were some good things,” he said. “They were talking about justice. The whole basis of the Lone Ranger, him being a decent guy, that was a good idea.”