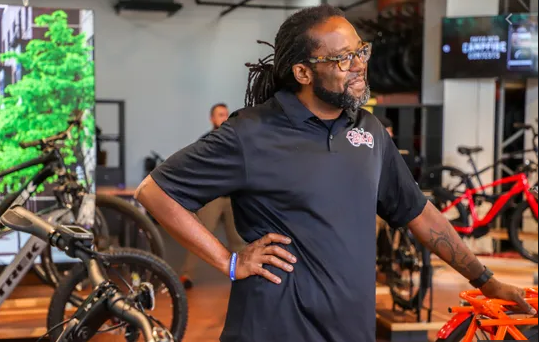 Jason Hall, cofounder of the massive group bicycle ride known as Slow Roll Detroit, had a flip response the first time someone asked whether he wanted to try their new electric motor-assisted bicycle, called an e-bike.

His attitude has since changed completely. No longer a skeptic, Hall became an e-bike evangelical once he actually rode one, and now has a job showcasing e-bikes to potential buyers at a soon-to-open Midtown Detroit e-bike shop, Electric Avenue Bikes, 3613 Woodward Ave., in the newly renovated Orchestra Place building.

[Want to know when businesses open and close in your area? Sign up for our free email newsletter]

Set to open after Labor Day, it will be the first bike shop in Detroit that only carries e-bikes. It will be the eighth location in the American Cycle and Fitness chain of stores and the first under the company’s “Electric Avenue” brand.

Prices for the store’s e-bikes range from $1,500 to as much as $7,000, with the store’s best-selling models retailing for about $2,500. The top speed is 20 mph on some of the bikes, 28 mph on others. Battery range can be anywhere from about 80 miles to 30 miles, depending on how the person rides their e-bike, according to Michael Reuter, co-owner of American Cycle and Fitness.