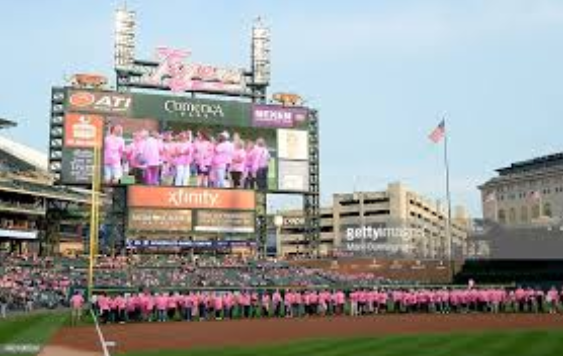 Leslie Hicks wiped tears from her eyes, trying to hold a cell phone steady, but it was nearly impossible because all the emotion – the fear and pride and pain and happiness.

She wiped her eyes again.

Her husband, Detroit Tigers catcher John Hicks, crouched behind home plate, and his mother, Karen, was on the mound in Comerica Park, waiting to throw out a ceremonial pitch on Friday night before the Tigers’ Pink Out the Park Game, an annual event that raises awareness about breast cancer and money to fight it.

Karen has been battling breast cancer for 4½ years. After spots appeared recently on her lungs, she started her fourth round of chemotherapy on Monday and will undergo therapy for the next 18 to 20 weeks.

“This is just so powerful,” Leslie said, the tears still in her eyes.

Karen had been practicing throwing for a couple weeks – her grandsons have been trying to teach her to throw in Richmond, Virginia.

“My oldest brother has two sons, so she has been getting lessons from my nephews,” John said. “The youngest one is like, ‘Nana, you have to make sure you take a deep breath and relax.’”

Karen threw the pitch and John came out of his crouch and snagged it.

“She’s a wonderful Christian woman and leaning on her faith,” Leslie said. “For her to be out here and to be positive, when she has to go through it again, it means the world. It’s a proud moment.”