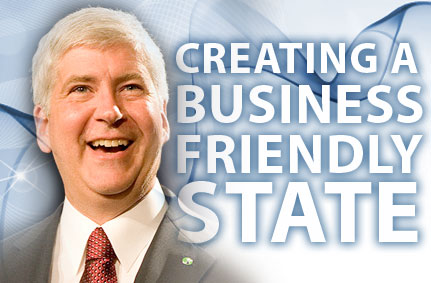 Business Leaders for Michigan (BLM), the state’s business roundtable, today announced that a recent survey showed that a majority of Michigan voters believe the Governor and Legislature are moving the state in the right direction. Further, most Michigan voters believe it is necessary to eliminate the outmoded personal property tax on business, in order to keep growing jobs here.

“The voting public clearly understands that Governor Snyder and our legislative leaders in Lansing are making the tough decisions necessary to turn Michigan around,” said Doug Rothwell, President and CEO, Business Leaders for Michigan. “Michigan residents understand that to create jobs quickly we must make our state competitive again like we outlined in our Michigan Turnaround Plan.  The next step towards that goal is the repeal of the personal property tax on business.”

The telephone survey of 600 residents likely to vote this November was conducted August 3-6, with a margin of error of +/-4.0 percent, by the Glengariff Group, Inc. and asked:

Recently the state legislature and Governor adopted legislation that made major reforms in Michigan’s tax system and made changes in how the state spends its money.  Do you think these changes were needed or not needed?

To gauge interest in a key component of the Michigan Turnaround Plan, another survey of 600 voters was conducted July 27-30 (with a margin of error of +/-4.0 percent) and asked this question:

Michigan has a tax on the personal property of businesses – such as computers and furniture – that most other states do not have.  These personal property taxes are collected by both the state and local governments.  Opponents of the tax say it is an unfair tax that businesses in other states don’t have to pay that costs Michigan jobs.  Supporters of the tax say Michigan’s cannot afford to lose any revenue right now.  I am going to read you several options for dealing with the business personal property tax, please tell me which one option you most support.

“The public gets it,” Rothwell said.  “They know what it takes to make Michigan strong again, and that’s business investment.  For too long, our tax and regulatory structure has kept us from competing effectively in our own region, let alone globally.  We need to act, and act fast, to make Michigan a top ten state once more.”

About Business Leaders for Michigan:

Business Leaders for Michigan (www.BusinessLeadersforMichigan.com) is a private, non-profit executive leadership organization dedicated to making Michigan a “Top Ten” state for job and economic growth. The organization is composed exclusively of the chairpersons, chief executives or most senior executives of Michigan’s largest companies and universities, which provide over 320,000 jobs in Michigan, generate over $1 Trillion in annual revenue and serve over 135,000 students. The organization’s work is defined by the Michigan Turnaround Plan, a holistic, fact-based strategy to get Michigan’s economy back on track. Visit www.michiganturnaroundplan.com for more information.