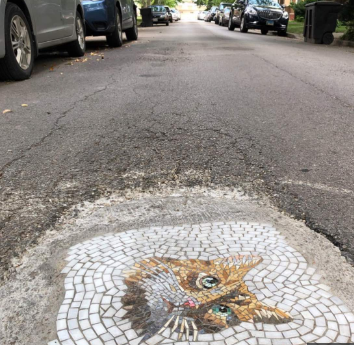 Since 2013, Chicago artist Jim Bachor has turned potholes on the city streets into mosaics. At WGN9, he writes:

What got me going with mosaics originally was the durability. I visited Pompeii for the first time in the late 1990s, and a tour guide pointed out an ancient mosaic and said, glass and marble don’t fade. So that mosaic that we’re looking at looks just like the artist intended 2000 years ago….

I still don’t know if it’s legal or not, but I have had discussions with police through the years, about a half dozen, and once they know what I’m doing they don’t have an issue with it.