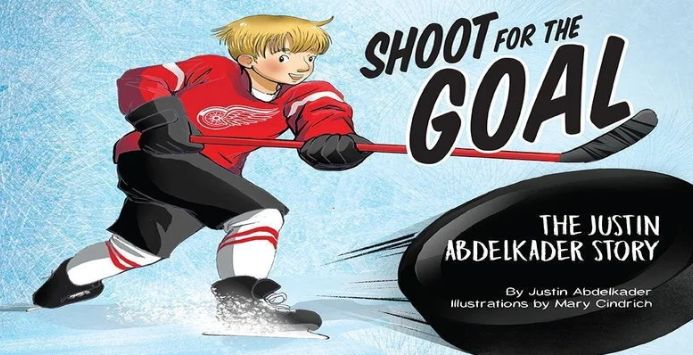 Soon, students participating in Justin Abdelkader’s reading program called Abby’s All Stars may be able to read a book written by the program’s namesake.

The Muskegon native and 10-year Red Wings forward has announced that he has written his own children’s book.  It’s about himself – a boy from the westside of Michigan who had dreams of playing for the Detroit Red Wings and all the obstacles that brought him to where he is today.

From his Instagram account, the former Michigan State star and recent MSU graduate shared the news of his “Shoot For The Goal: The Justin Abdelkader Story” children’s book, penned by Redwings #8 himself.

The book was illustrated by Mary Cindrich, and published by Momentum Books.  Watch for his book signings in the Detroit area.  The idea originated with Abby’s All-Stars, his community program in which Michigan elementary school students read texts that Abdelkader personally recommends. Over the course of his research, Abdelkader came across The Little Linebacker, an illustrated semi-autobiography by Stephen Tulloch, the former NFLer who played for Detroit 2011-15. Seeing another athlete author was inspiration enough for him to write his own story.