Taste Love Cupcakes, a cupcakery located in downtown Royal Oak that just celebrated its one year anniversary, has been named the winner of the April 22nd episode of Food Network’s nationally-acclaimed show, “Cupcake Wars”.

Long-time close friends, Michelle Brown and Yolanda Baston, the visionaries and owners of Taste Love Cupcakes, applied for Cupcake Wars in early September 2011 and shortly thereafter were chosen as one of the four finalists to be featured on the show.

“It is very exciting as new business owners to win such a nationally recognized contest,” said Brown. “We’re proud to represent the state of Michigan and the Metro Detroit area with our cupcakes.”

Brown and Baston opened Taste Love Cupcakes on April 16, 2011, and funded it using their own personal savings. No outside grants, investors or loans were utilized.

The business, which now retains four employees and prides itself in using local and organic ingredients whenever possible, sells its entire inventory of cupcakes every day. Nothing is frozen or pre-packaged.

“There is a hard working quality to businesses in Detroit and Michigan that fuels our desire to reach and succeed. As a community we have experienced challenges recently. However, we are strong and resilient-determined to be part of the revitalization of our community,” said Baston. 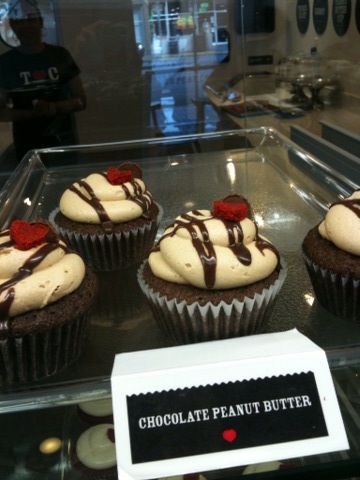 In its fourth season, Food Network’s “Cupcake Wars” is a national, weekly show that features four of the country’s top cupcake bakers for a face off in three elimination challenges until only one decorator remains. Winners are given a cash price of $10,000 and the opportunity to showcase their cupcakes at the winning gig, which have included events such as a star-studded magazine party and an A-list celebrity golf tournament. The show is hosted by Justin Willman and judges include Candace Nelson, founder of Sprinkles Cupcakes (the world’s first cupcake bakery), Florian Bellanger, chef and co-owner of the online macaroon company, MadMac, and a third “rotating” judge is a special guest and is associated with the event in which that episode’s winning cupcakes are to be served.

Both Brown and Baston grew up in the Detroit area, graduated from the University of Michigan, Ann Arbor and currently reside in the metro Detroit area.

Taste Love Cupcakes was established in April 2011 in downtown Royal Oak, Michigan by two close friends, Michelle Brown and Yolanda Baston, who met while they were college students at the University of Michigan, Ann Arbor. While one took the path of law and the other went through the BBA program and focused on business, their passion for fine foods and delicious cupcakes eventually led them to create their unique business partnership. Find Taste Love Cupcakes on Facebook and follow them on Twitter or visit their web site at tastelovecupcakes.com.