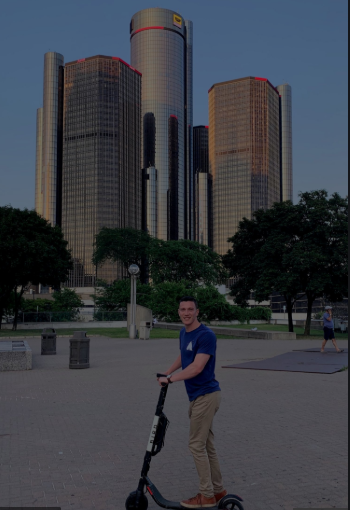 I wanted to learn about the city’s resurrection.

According to a book called The Arsenal of Democracy, in 1941, Detroit had a bigger economy than any foreign country except Britain, France, Germany, and possibly the Soviet Union. (I’m skeptical of this statistic). Today, Detroit is a growing city with an up-and-coming downtown.

Here’s what I learned during my visit. Take everything with a grain of salt. Nothing is fact-checked.

1. Dan Gilbert, the founder of Quicken Loans, comes up in every conversation with a local. When you listen to locals speak, it sounds like he’s involved in every major project in the city. His family of companies employs 17,000 people, and he is the largest employer and taxpayer in Detroit.

2. Downtown is up-and-coming. According to our tour guide at the Detroit Institute of Art, Dan Gilbert subsidizes house and apartment purchases in the downtown area. He pays people $10,000 to purchase an apartment and $30,000 to buy a home in the city. I’ve never seen a city with so much local pride.