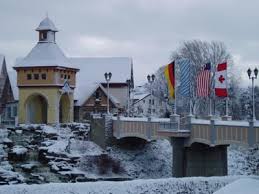 It’s all about chicken!

It’s the draw that attracts millions of people each year to Frankenmuth, Mich., a two-hour drive north of Detroit on 1-75.

We’ve dined on chicken and all the trimmings many times over the years in Michigan’s Little Bavaria, but always in the summer months.

There’s no question visitor numbers in the quaint German community are highest from April through November. In winter, it’s quiet.

During the summer months – without reservations – visitors are likely to stand in line for several minutes, or longer – at one of the town’s many eateries. There are no lineups this time of year.

Frankenmuth was founded in 1845 by a group of 15 German-Lutheran missionaries who came to the area for the purpose of teaching Christianity to the Chippewa Indians.

“Franken” depicts the province from which the settlers came and “muth” means courage in German.

The name “Frankenmuth” means “courage of the Franconians.”

Today, Frankenmuth is a thriving community of 4,900 residents who take a great pride in preserving the German heritage.

Festivals and events abound in Frankenmuth throughout the year.

The town boasts both German events like the Bavarian Festival and Oktoberfest and traditional annual festivals like the Auto Fest and the Big Country Fest.

We were a week or so late to take in the Zehnder’s Snowfest, a fun-filled winter event for the entire family including snow sculpting and ice carving competitions, fireworks and entertainment.

There is much to do and see in Frankenmuth including the Bavarian Bell Riverboat, Fantasy Carriage Company, Fortress Golf Course and Bavarian Inn Lodge Family Fun Centre.

And close by is the Birch Run outlet mall, a popular destination for motor coach tours.

But a visit to Frankenmuth wouldn’t be complete without treating yourself to an all-you-can eat chicken dinner.

Our dining choice has always been Zehnder’s of Frankenmuth, America’s largest family restaurant.

Each year Zehnder’s serves nearly a million guests with the superb hospitality that has made it a worldwide attraction.

If you enjoy shopping you will definitely enjoy Frankenmuth. The town boasts the world’s largest Christmas store and hundreds of specialty shops.

And not unlike dining choices, there are hundreds of accommodations to choose from ranging from fancy resort-style housing to B and Bs.

In past years we’ve called the Frankenmuth Bavarian Inn Lodge home away from home but this time we downsized to the nearly-new Country Inn and Suites on South Breyer Road at Birch Run – across the street from the outlet mall.

The well-appointed hotel offers many of the amenities of larger facilities including indoor pool, free breakfast, free bedtimes treats including giant raisin cookies and a friendly staff – all for less than $50 at this time of year.

Incidentally, the Bavarian Inn Lodge is sponsoring a family fun photo contest this year. The deadline is Aug. 31.

The grand prize is two nights lodging in a family or whirlpool suite. A total of 20 prizes are available.

Photos of your family and friends enjoying the lodge and its properties are being sought for the contest.

For those who really enjoy shopping and don’t mind walking, I would recommend a visit to Great Lakes Crossing outlet mall off 1-75 north of Pontiac. You could easily spend a day or two and still not take in all of the stores in the mall.

There is still ample time to purchase tickets for next week’s Disney On Ice presents “Treasure Trove” in London.

The brand new skating spectacular appears in London from Feb. 23 to 26 for eight performances at the John Labatt Centre.

Tickets are available at the John Labatt Centre box office or by calling 1-866-455-2849. Visit online atwww.disneyonice.com.

The show is being presented by Feld Entertainment, a worldwide leader in producing and presenting live touring family entertainment experiences.

Get tangled up in Disney’s 50th animated feature with Rapunzel and Flynn and enter the worlds of your other favourite Disney princesses – Tiana, Cinderella, Jasmine, Ariel, Sleeping Beauty, Belle, Mulan and the one who started it all – Snow White.

Set sail with Peter Pan, the always-sassy Tinker Bell and the cantankerous Captain Hook and his pirate pals on an adventure beyond Never Land.

Trek the wilds of Africa with Simba, Nala, Pumbaa and Timon as they discover the true meaning of the Circle of Life and don’t be late for a very important date with Alice and the Mad Hatter as they march with the Queen of Hearts’ Army of Cards.

Thornton moves from his executive chef position at the Fairmont Orchid in Hawaii to lead a brigade of more than 110 culinary professionals from within the largest kitchen in Canada.

Thornton’s 20-year culinary career has spanned from the Atlantic to the Pacific Ocean with several stops between.

Located in the heart of downtown Toronto, the Fairmont Royal York is connected by the underground PATH to the TTC and Union Station.

The hotel is within walking distance to the theatre and business district and the city’s best shopping and dining.

Nearby attractions include the Rogers Centre, Hockey Hall of Fame, Chinatown, St. Lawrence Market, Harbourfront and the Air Canada Centre.

The CN Tower in Toronto is offering great entertainment value for kids of all ages with a special admission offer from Feb. 18-20.

Save 25% off a tower admission ticket.

The major attraction is also featuring a Leap Year special – visit the tower on Feb. 29 and receive a complimentary return visit.

AND AT THE ROGERS CENTRE

The Rogers Centre in Toronto is marking Family Day with a special treat this year.

The centre is sponsoring a weekend-long family fun fair from today through Monday.

Purchase an all-day ride pass for $20 and stay n’ play for the entire day.

HEADING TO THE LAND DOWN UNDER?

For a limited time, travellers to Australia who reserve a spot on The Ghan, Indian Pacific or The Southern Spirit, will receive up to 25% off every ticket booked now through March 31 for travel through March.

Prices start at $615 per person for Gold Service.

The annual publication introduces the heart of Alaska, characterized by wide expanses of tundra, boreal forests and the tributaries of mighty glacier-fed rivers.

With the interior’s summer sun shining nearly 24 hours a day, Fairbanks, Alaska is an extraordinary destination.

Pan for gold, float the Chena River, cool off in an ice museum, go fishing, view wildlife, take a dip in a hot spring, experience an art gallery or museum, see Alaska native dancing or take a short drive to the town of North Pole and say “hi to Santa Claus.”

Located right in the middle of the state, Fairbanks is the gateway to Alaska’s interior and the Arctic.

Denali National Park is a mere two hours away, the Arctic Circle is a four-hour tour, world-class hot springs are an hour down the road, a myriad of villages, refuges and parks are short flight away and the alluring Alaskan wilderness is literally at the doorstep.

For travellers who can pack their bags and take advantage of last minute deals, Wildland Adventures is offering a six-night safari to Zambia for $2,995 per person with no single supplement for single travellers – a savings of $1,000 per person.

Travel, however, must take place prior to March 31.

Sugarland will appear April 10 and 11 at Fallsview Casino in Niagara Falls.

Since their multi-platinum debt album, Twice the Speed of Life in 2004, the country music duo has sold over eight million records and produced five number one hit singles.

RADISSON HAS NEW HOTEL IN THE WINDY CITY

If so, you should check out the all-new $125 million flagship Radisson Blu Aqua Hotel.

The hotel is a signature piece of Radisson’s Ambition 2015 growth strategy, which is designed to lift the brand image.

The hotel occupies a prime spot in the Lakeshore East neighbourhood and is within walking distance to Chicago landmark attractions such as Michigan Avenue and the Magnificent Mile, the theatre district, Navy Pier and the lakefront and Millennium Park.

The lobby has remarkable features such as 50-foot-long fireplace and brass wall in the lobby lounge along with a brick wall flecked with backlit glass blocks that evoke the Chicago skyline glimmering at night.

“There’s not another hotel in Chicago offering all the amenities we’re offering under one roof,” says Pierre-Louis Giacotto, hotel manager.

There is an in-hotel theatre, an indoor, half-sized basketball court, an indoor and outdoor pool, an 80,000-square-foot roof garden with a half-mile jogging trail, gardens, a lap pool and rigging for an 1,800-square-foot tent.

The Hilton Garden Inn in Carlsbad, Calif., is featuring a spring break special.

The package not only offers a prime coastal vacation location but made-to-order hot breakfast and a roster of special beach and sightseeing benefits for $169 per night.

The package is available from now through May 13.

The one thing you and the family can do this weekend for free is go fishing.

The government has declared this Family Day weekend free fishing.

It’s a great opportunity to get outdoors with the family and enjoy some fishing – but stay off the ice at Mitchell’s Bay. It’s not safe to walk on.

Joining the elite ranks of 100-year-old iconic hotels such as The Savoy in London, The Plaza In New York and the Fairmont Banff Springs in Alberta is no small feat.

But in 2012 Fairmont will be celebrating not one but two centennial birthdays.

They are Ottawa’s Fairmont Chateau Laurier on June 1 and Boston’s Fairmont Copley Plaza on Aug. 19.

Both grand dames will be offering special offers, events and activities to highlight the history and grandeur that have graced their halls over the past century.

The service will increase during the peak season from March 1 through April 30 to four flights per week.

The Wye Marsh at Midland is taking part in this weekend’s 2012 Great Backyard Bird Count and it needs help from kids and their parents.

The Great Backyard Bird Count is an annual four-day event that engages bird watchers of all ages in counting birds to create a real-time snapshot of where the birds are across the continent.

Anyone can participate, from beginning bird watchers to experts.

It takes as little as 15 minutes on one day or you can count for as long as you like each day of the event.

Readers are encouraged to share their travel experiences or questions with Bob by calling 519-354-2000 ext 317, faxing 519-436-0949 or e-mailing bboughner@chathamdailynews.ca