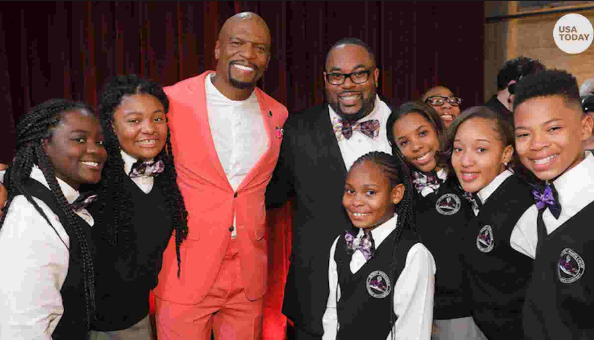 Detroit has a long, rich musical history from Motown to MC5, Eminem, Aretha Franklin, Jeff Mills and many, many more. Last Tuesday night’s episode of America’s Got Talent had the Motor City’s vibrant music scene stamped all over it. The Detroit Youth Choir is a community-based singing group, comprised of inner-city kids, many of whom come from difficult backgrounds.

“They all have great grade, and they’re all talented,” enthused their inspirational director, Mr White, ahead of their audition. He wasn’t wrong. The choir hit all the right notes on NBC’s talent show, with a bouncy, first-up performance of “Can’t Hold Us” by Macklemore & Ryan Lewis.
Simon Cowell remarked. “If you can keep doing this, where every performance is the last thing you would expect a choir to do, you could win this.”

But before the judges could vote, host Terry Crews made his feelings known. The Michigan native was particularly moved by the performance, and he singled out White for his fine work.
“Every young man and woman on the stage represents me, and where I came from,” he announced, holding back tears. “I remember, sitting at my window in Flint, Michigan, dreaming. I wanted to make it, I wanted to be here. And they’re here. And they did so well.”