We all knew. The Houston Texans’ 4th quarter drive that began backed up at their own end zone culminated in an Arian Foster yard TD run with 5:43 remaining in the game. And from that moment on we all knew. Every well-seasoned Lions fan had seen this song and dance routine countless times already. The game would not be decided for 18:32 after the TD run, but I can practically guarantee that all of the millions in the Lions legion felt the horrible, disgusting, all-too-familiar feeling in their stomachs as deep down we resigned ourselves to our imminent fate. 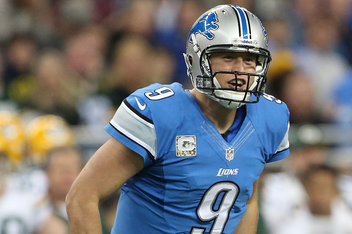 All season long, television pundits and sports analysts have attempted to diagnose the Lions’ issues. Detroit’s secondary couldn’t cover a twin bed with a King-size comforter. Matthew Stafford couldn’t hit water if he fell out of a boat. The Lions couldn’t score in the first half if a porn star offered herself up. All of those assertions are undoubtedly true. But they only tell a small portion of the story. It’s ok, sports media, I don’t expect you to understand. You are trained to watch athletic events, interpret what you see, and offer up analysis. You are doing nothing wrong.

But there is one crucial element that non-Lions fans are simply incapable of understanding. Any Lions fan who has talked football with their more fortunate friends, colleagues, and coworkers who have the blessing of being attached to a respectable football team know that they simply don’t understand. Uh, well, when my Giants need a touchdown in the fourth Eli goes down the field and scores, why can’t Detroit do it? Keyword “Giants”. With the Lions, you can’t simply pick out aspects of a game and define them in football terms. They are the Lions.

I don’t want to call it a curse. Following their triumphant 1957 NFL Championship season, there was no fateful trade, a Billy goat was not asked to leave the stadium, and a black cat did not run on the field (or did it?). But something has stuck with the Lions that enables a feeling of hopelessness to be injected into the turkey-filled guts of Detroit fans as we witness yet another self-destruction. Something allows a different combination of players wearing an ill-fated uniform to come together and lose games with amazing, unrespectable, awe-inspiring efficiency. Let’s call it the sickness.