Day 4 in Haiti and we are just wrapping up our devotional time. Our team brought music, lyrics and a Bluetooth for our worship and we grew by 6 guests to our team devotion this evening. It was great that people were attracted to the joy of our worship. It’s hard not to hear our team singing from the corner of the roof. 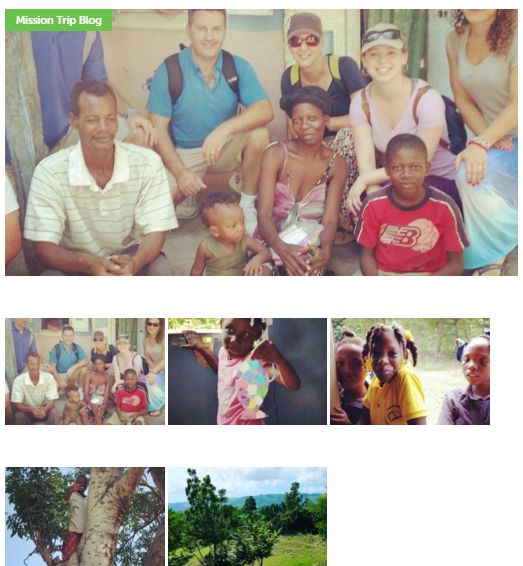 We woke up and got ready for our 1 ½ hour drive up the mountain back to Palto, which is part of Turpin. We spent the morning going house to house talking with many families. We split into 2 groups again with translators. One of our teams met a farmer who took them on a tour of all of his crops. He even climbed the tree to get the team some genips, a small Haitian fruit that everyone enjoyed. Our other team met a woman struggling with epilepsy, that was one of our sadder houses this week. Due to her illness, she could not care for her children and they had to be sent to live with relatives and friends and her husband had left. We gathered around her as a team and laid hands on her and prayed right on her porch. We also got the privilege of meeting with a local pastor and were able to learn more about his church and the challenges the churches in Haiti face. One of the largest was voodoo and voodoo priests. One of the teams actually had a voodoo priest run up on his donkey while we were talking to a family. He said that we practice our white magic but he practices black magic in Creole. We kept on walking through the village and there were other Christians who said sometimes it’s hard with their neighbors practicing voodoo and they sometimes do get scared. One of our team members blew us away today with his walking in how the God was calling him. On Monday he told us he was feeling stretched and it was really hard for him to go house to house and talk to the families and pray out loud. Today however he explained the flipper flapper at one house and a couple of houses later he stepped out and prayed. It was an amazing blessing to witness him growing spiritually right in front of our eyes. Life change is happening here, not just in the lives of the Haitians but the lives of our team members as well. Each house we asked for prayer requests prayed with them and left a hygiene pack for every member of their family. One family we asked what they were thankful for and the father of the house said that each day that God wakes him up and gives him a new day is a great day!

Our second kids club was today and word must have gotten out about Monday because we had about 200 kids show up. We have never seen a more packed church, you could not take a step because there were so many children. The kids were so much fun, their energy is amazing and we had a blast dancing around singing songs with them. A team member wrote a song and had our translator interpret it all for her and she got up and taught the kids. The kids caught on quickly and had a lot of fun singing it. Then they were taught our flipper flapper (a wordless Gospel picture book) that we explained and our team members acted out the pictures for the kids. After we explained the gospel we asked who had Jesus (Jezi in Creole) in their hearts. A little more than half of the kids raised their hands. Then we asked who didn’t have Jesus in their hearts and who would like to. We had 36 kids stand up and pray the prayer of salvation for the first time. They each got a flipper flapper to take home so that they could share the gospel with their family and friends. Then the kids took their plates to get their meal of rice and beans and sat and ate before they went home. We made the drive back to campus and the kids followed after the truck waving and yelling goodbye.

After dinner our team had assigned dish duties. Our assigned interns (turned friends) helped with dishes as we sang and danced around the kitchen. Our interns are southern, so there may have been some country line dancing lessons thrown in. It’s nice to come back to campus after seeing more than our hearts can sometimes handle and bond as a group. We decompress a little and process everything we see. Our devotional is a time to really dig deep and talk about how God is working through each one of us on this trip. Then we worship with songs.
Thank you for your continued prayers as we head back into Turpin tomorrow