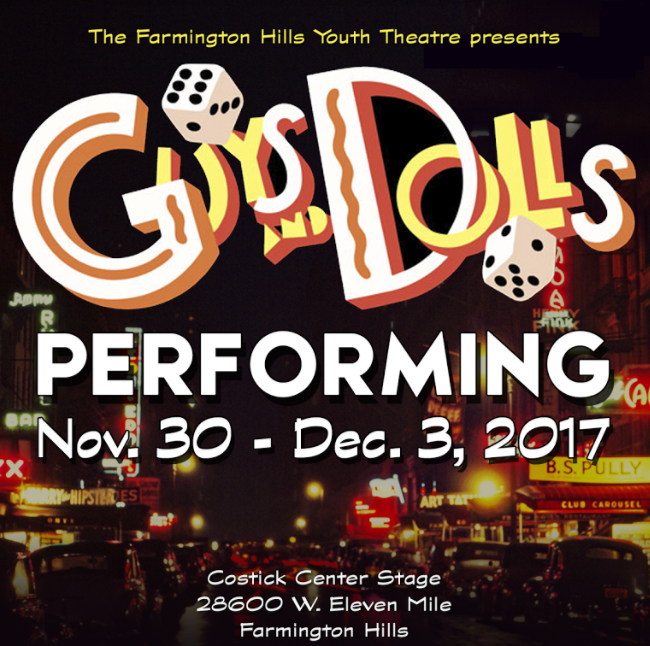 “Luck be a lady, tonight.” The Farmington Hills Youth Theatre will present Guys and
Dolls November 30 through December 3 at the Costick Center, located at 28600 W.
Eleven Mile Road in Farmington Hills. Guys and Dolls features over 100 young actors from
Farmington Hills and surrounding communities.

Set in a mythical New York City, Guys and Dolls is an oddball romantic comedy and a
longtime fan favorite. Nathan Detroit tries to set up the biggest craps game in town
while the authorities are on to him. Meanwhile, his girlfriend Adelaide laments their 14-
year engagement. Nathan turns to Sky Masterson for help, and in a twist of events, Sky
ends up pursuing Miss Sarah Brown. Guys and Dolls takes us from the heart of Times
Square to the cafes of Havana, Cuba, and even in the sewers of New York City, but
eventually, everyone ends up right where they belong.

Guys and Dolls are included in Rolling Stone Magazine’s 10 Best Musicals of All Time.
Considered by many to be the perfect musical comedy, it ran for 1,200 performances
after opening on Broadway in 1950. Frequently revived, the show has been performed
with numerous all-star casts, featuring Ewan McGregor, Jane Krakowski, Brian Stokes
Mitchell, and Jessica Biel.

Guys and Dolls are presented through special arrangement with Music Theatre International (MTI).

All authorized performance materials are also supplied through MTI www.MTIShows.com.