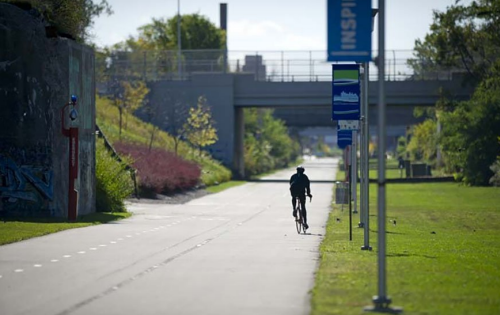 Good news for Detroit bikers, walkers and general green-space lovers: The city has struck a deal with Conrail to purchase 76 acres of railroad property, which will be transformed into a bike and pedestrian-friendly greenway. The newly purchased land, stretching 7.5 miles, will connect to existing paths such as the Detroit Riverwalk and Dequindre Cut, and with upgrades coming to the southwest Detroit Greenlink as well, the city envisions a 26-mile loop, known as the Inner Circle Greenway, when all is said and done. ”The Inner Circle Greenway is going to connect Detroiters from every corner of the city to some of our greatest resources,” said Mayor Mike Duggan. “Residents will have a safe and reliable non-motorized path of greenways and bike lanes connecting them to the riverfront, Eastern Market, parks across the city and more.”