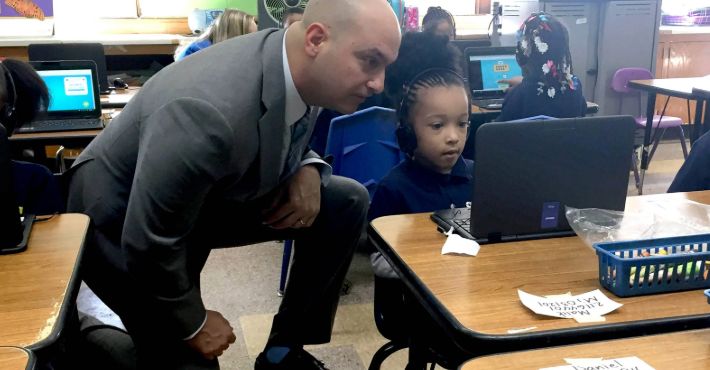 The Detroit district superintendent received high marks from the school board after his first year, a vote of confidence for his effort to turn around what is maybe the nation’s most troubled urban school district.

Nikolai Vitti’s final grade: 3.2 out of a possible 4 points, for a rating of “effective.”  The very existence of an accountability system for the district’s top official is a step forward for Michigan’s largest district, which was operated for the better part of the last two decades by state-appointed emergency managers who were not beholden to voters in Detroit.

As Vitti leads the district into the second year of a mammoth turnaround effort, he is relying on the school board’s support. Any major reforms require the board’s approval.

Vitti took the reins in May of 2017, and it’s still too early to measure his progress on key reforms. Several data points were excluded from the report for that reason.  Sixty-five percent of the evaluation is based on board members’ ratings of what were described as Vitti’s “professional standards.” The remainder is based on hard data, like student test score growth.

LaMar Lemmons, a board member who has chosen to not run again, said the superintendent has taken on an historic challenge.

“Nowhere in America in history post-slavery has there been a people starting from the very beginning like we have,” Lemmons said. “He has to be given credit for that. He’s really coming in to rebuild a school district.”

Click here for more information: Vitti made the grade in first year of Detroit turnaround, school board