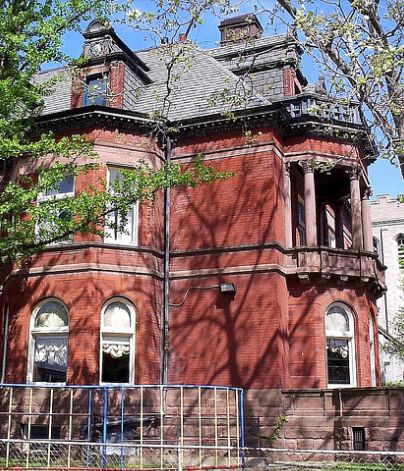 The Perry McAdow House is a Renaissance Revival house located at 4605 Cass Avenue in Midtown Detroit, Michigan. It was designated a Michigan State Historic Site in 1976[2] and listed on the National Register of Historic Places in 1980.[1]

Perry W. McAdow earned his fortune gold mining in Montana.[2] In 1891, he and his wife Clara built an elaborate mansion on Cass for a cost of $65,000 as an entrance into Detroit society.[3] The couple lived there until 1897. The house was used as a private residence until 1913 when it was sold to the First Universalist congregation. The church used it as a place of worship for three years until a new church immediately to the north was completed, after which the house was used as a parish house.[2]

The house has two and a half stories with a hipped roof and is constructed of red brick and brownstone. The exterior boasts bay windows, Corinthian-columned porches, parapet balustrades, and a modillion cornice; the interior features notable frescos, paneling, plasterwork and stained glass. Behind the original house is a two-story, red brick church hall, built in 1917.[2]