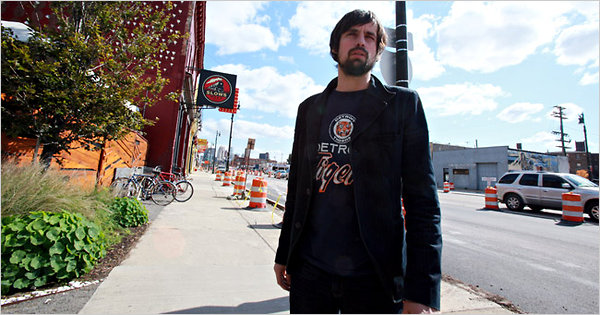 Phillip Cooley, an owner of Slows in Detroit. More Photos »

HOW much good can a restaurant do?

In this city, a much-heralded emblem of industrial-age decline, and home to a cripplingly bad economy, a troubled school system, racial segregation and sometimes unheeded crime, there is one place where most everyone — black, white, poor, rich, urban, not — will invariably recommend you eat: Slows Bar B Q.

Slows opened in 2005 at the edge of downtown Detroit, in Corktown, across from the long-abandoned central train station, itself a symbol of widespread blight. Hidden behind a stylish wooden door with no discernible handle, it has become a beacon, drawing longtime Detroiters, newly arrived young people and scores of suburbanites, who wait for hours to sample the pulled pork and dry-smoked ribs and coo over the upcycled design. The restaurant and its sleek décor were dreamed up by one of Slows’ owners, Phillip Cooley, who has emerged as a de facto spokesman for the now-hip revitalization of this city.

“Before Slows was built, generally speaking people came into the city for hockey games, ball games and to see the ‘Sesame Street Spectacular,’ ” said Toby Barlow, Detroit’s other de facto spokesman. Mr. Cooley, he said, has “validated the idea that people will come into the city.”

Anywhere but Detroit, the notion that people will show up and pay money for barbecue and beer would not be seen as revolutionary. But destination restaurants are still rare enough inside the city limits that Slows was a notable success. Few have taken it as an exact blueprint — the mix of things that make it work are hard to copy — but it has helped change the reputation of a city where a night on the town used to offer mostly the wrong kind of thrills.

To make sure the positive change takes hold, Mr. Cooley has parlayed the good will of his barbecue joint into a restless pursuit of community-building. He advises other business owners on everything from liquor licenses to using salvaged lumber. Most people in Detroit who are involved in food — or art, or music, or night life, or civic service — have brushed up against him at some point, a function both of how involved he is and how interconnected the city is.

Also: “You’re not going to talk about how cute he is, are you?” Mr. Barlow said, teasing.

Well, not exactly, but it’s not lost on anyone that Mr. Cooley, 32, used to be a fashion model, walking European runways for the likes of Louis Vuitton before returning home to Michigan at 24.

“He’s a pretty idiosyncratic character,” said Mr. Barlow, an author and ad agency executive. “He’s like a living Venn diagram, he’s got a lot of circles that are colliding around him.” (Mr. Barlow among them: he is working with Mr. Cooley on a new restaurant in a former pawn shop.)

Mayor Dave Bing appointed him to be a chairman of his Detroit Works Project, a major initiative to map the future of the city. It is one of a half-dozen boards that Mr. Cooley serves on, including the Greening of Detroit and the A.C.L.U. of Southeastern Michigan. The scale of his activity as a restaurateur-turned-do-gooder would be rare anywhere, but it particularly stands out here.

“Phil doesn’t give lip service to getting involved in challenges,” Mayor Bing said through a spokesman. “He is out there getting his hands dirty and working to make changes.”

Mr. Cooley, the son of a prominent real estate developer and city council member in Marysville, Mich., a lakefront town of about 10,000 that’s an hour from Detroit, has an exalted indie lifestyle and mainstream clout. He goes to several events a night. “I’m needed here,” he said. “It’s rewarding, the day-to-day work that I do. I wake up and I feel like I’m making a difference.”

In Detroit, he added, “I could get involved and not be judged by my age.” He was driving from Slows to the site of Slows to Go, a catering and take-out outpost that he and his partners — who include his father, Ron, and brother, Ryan — are opening in the coming weeks. “This is an incredibly fruitful place to do business, because we’re so starving for anything,” he said.

Rent is cheap here, but spaces in good condition are hard to find. So are investors, which is why entrepreneurs often double as carpenters. With his parents as co-signers on the leases for two buildings totaling $159,000, and the chef and sous-chef as sweat-equity partners, Mr. Cooley opened Slows using an advance on his inheritance, helping to refurbish the space himself.

“We were going to do fine dining,” he said, “and we looked around the neighborhood and said, ‘What the hell are we thinking?’ ” Barbecue was an affordable, populist option.

“Slows was almost a zeitgeist thing,” said Todd Abrams, a restaurant critic for the Metro Times, a local weekly, and the founder of Gourmet Underground Detroit, a dining and drinking club. “They came into that neighborhood at a time when it really needed it. I’m there probably once every other week, if not more.”

In its first year, Slows did $1.8 million in sales, triple what the owners expected, Mr. Cooley said. And now they are eager to spread their wealth.

When Dave Mancini was opening Supino Pizzeria, one of the city’s two artisanal pie places, two years ago, Mr. Cooley was building a coffee shop, Mercury Bar. “He would bring his whole crew here for lunch once a week,” Mr. Mancini said. “That’s a nice chunk of change when you’re opening up. And the people that Phil knows are the insider-hipster crowd, so they spread the word — social networking.” Slows sometimes sends its overflow crowds to the pizzeria, too.

Places like Supino, by Eastern Market, the city’s bustling food hall, are stops on the welcome-to-Detroit, it’s-more-than-just-grit tour that Mr. Cooley has given to Matthew Barney, Johnny Knoxville, the musician Sufjan Stevens and countless other V.I.P. guests. His standard greeting for out-of-towners: “Are you staying with me?”

The airy, modern loft apartment above Slows, where he lives with his girlfriend, is “kind of a flophouse,” he said in an interview there. Case in point: an urban-revitalization entrepreneur from Chattanooga, Tenn., sat typing at his laptop at the dining table, preparing for a conference; he wound up serving beer at a Slows party. “We’re working on getting him to move here,” Mr. Cooley whispered.

“This is always how he’s been — he just has an aura about him that attracts people,” said Kevin Griffin, a friend from DePaul University in Chicago, where Mr. Cooley briefly attended business school.

Not all of Mr. Cooley’s projects are successful. Mercury Bar, a high-style neon-accented place that he opened with eight partners across the street from Slows in 2008, closed less than half a year later. Mr. Cooley blamed high prices and mismanagement by some of his partners. Others chalked it up to a misunderstanding of the marketplace; it was simply too slick for Detroit. But Mr. Cooley did not give up on espresso: he leased another space he owns to Mercury’s head barista to build another coffee bar, the kind of risk that traditional landlords might not take.

“Lenders are very reluctant to lend anybody money for anything in downtown Detroit because it’s still viewed as a gamble,” said Dave Kwiatkowski, an owner of Detroit Bros. Custom Cycles, a motorcycle shop in suburban Ferndale. Mr. Kwiatkowski is set to open the Sugar House, a classic cocktail bar, in the building next to Slows. He and his wife plan to move into an apartment upstairs, à la Mr. Cooley. The rest of the block is also a Cooley corridor: Ryan Cooley’s real estate agency is next door to Slows, and the family and their partners own two more buildings, which they plan to turn into lofts, art spaces, a pop-up shop or business incubator and, eventually, another restaurant.

As Slows grew, the food scene in Detroit expanded around it. Gourmet Underground, started in the spring, quickly grew to over 100 members; they get together regularly for events like Bloody Mary-and-bacon tastings. An artisanal butcher has cropped up, and D.I.Y. projects like the Detroit Zymology Guild, a weekly canning session held in the back of an art gallery, thrive alongside food trucks and backyard organic farmers. An Iron Chef, Michael Symon, even has a presence, at Roast, a restaurant popular with locals and tourists in a luxury hotel downtown. And, in the surest sign of success, several new barbecue restaurants have recently opened in the city.

Though he is occasionally called the Prince of Detroit, Mr. Cooley still describes things as “fancy pants,” dresses in torn T-shirts, and is quick to rail against chain stores, mass development and other symbols of late-stage gentrification. He plays in a summer soccer league and organizes an underground restaurant, ClandesDine, a secretive, invitation-only affair where meals are served in abandoned buildings.

His boosterism was evident on a recent Sunday, when Slows celebrated its fifth anniversary in Roosevelt Park, in front of the train station. More than 2,000 people showed up on a chilly, rainy day for microbrews, $5 plates of Niman Ranch pork sliders and mac and cheese. On the lawn, 128 teams competed at cornhole, a Midwestern beanbag-toss game. The whole thing was a benefit for the park, another of Mr. Cooley’s projects. He hopes to open a skate park there — a visible notch of coolness.

Dressed in a blue blazer and an ascot, he played on a cornhole team alongside his father and brother, losing in the semifinals. “You have to dedicate a lot of time to it,” he said, sitting at the bar at Slows the day after. “And also not drink.” Moments later he was deep in conversation with the suburban stranger sitting next to him, and moments after that the guy had volunteered to help build the skate park.