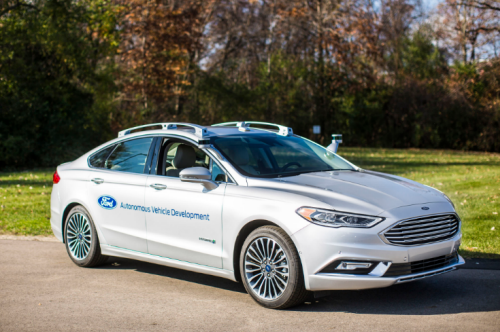 The University of Michigan’s one-of-a-kind research center for autonomous and connected vehicles is something like a practice field for Ford Motor Co.Inside that controlled environment, Ford runs drills that put the automaker’s fully autonomous Fusion Hybrid test vehicles in considerably dangerous — yet scripted — situations, like unexpected pedestrians crossing the road, or bicyclists riding in the street. The objective is to ensure the vehicle’s sensors, cameras and mapping system all react properly to anything it could encounter on the road.Collected data will be used in future autonomous cars, Ford said.That research code will be incorporated into the “brain” of a fully autonomous vehicle without a steering wheel, accelerator or brake pedal that Ford plans to bring to market by 2021. Ford handed the code it had developed over 10 years of autonomous research to artificial intelligence company Argo AI earlier this year, shortly after the Dearborn-based automaker announced it would invest $1 billion in the company.