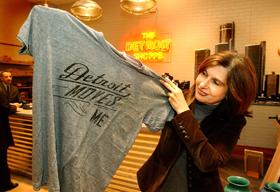 The Detroit Shoppe at Somerset Collection in Troy. The 4800 square-foot space has museum like exhibits Detroit memorabilia and iconic Detroit brands such as Better Made, Faygo among others. The shoppe will be open through the end of the Auto Show with proceeds going to charity.

Those iconic brands — along with memorable Detroit photographs and artifacts — are being featured at The Detroit Shoppe, which opens Nov. 1 at Somerset Collection in Troy.

The 4800-square-foot space next to Macy’s on the mall’s second floor, is curated in part by the Detroit Historical Museum. The store has a limited shelf life. It will be open through Jan. 23, the end of Detroit’s North American International Auto Show.

The space offers a sampling of area museums. In one corner is a recreated Vernor’s soda fountain. In another, visitors can see Pewabic pottery tiles.

Guests are bound to linger over a corridor lined with black-and-white photos showing scenes from Detroit’s past.

Officials said they were inspired to create the shop after the success of a Somerset Collection advertising campaign featuring Detroit’s most famous spots.

“Detroit is talked about in documentaries of America,” said Linda McIntosh, Somerset Collection’s marketing director, “and the people, places the products of Detroit helped move the country forward.

“The shop is a billboard for the City of Detroit saying, ‘You belong here.’ We want people to experience what the city has to offer — whether it’s a trip to the Henry Ford Museum, or a night of jazz or to take in a hockey game.

“Our goal is to help people decide where to go in the city and encourage them to do that,” McIntosh said.

The store — which includes historical pieces loaned by private collectors — allows visitors to savor what has made Detroit great.

Small niche areas invite people to peek inside. One features a glimpse of the Detroit Hudson’s flagship department store, complete with a preserved store directory. Another space welcomes people into a recreated 1960s-era Motown studio with handwritten music on display.

Many items are for sale. People with a hankering for Sanders hot fudge and other food products will be able to purchase them at the shop.

Debuting at the store is a $20 T-shirt emblazoned with the “Detroit Moves Me” slogan. Proceeds from shirt sales go to the charities. Shoppers can pick six designated items for their “Great Detroit 6 Pack” and receive a $10 Somerset gift card in return.

The Somerset Foundation operates the store, with all proceeds from the sale of merchandise going to Detroit nonprofits and cultural institutions.

“They’re the reason we can give every penny back,” said McIntosh.

Tours of famous Detroit area venues are being promoted by the Detroit Shoppe with free shuttles provided from the Troy store. Reservations can be made in person at the store or by calling the store at 248-816-5470. Guests pay for their own costs at the venue, including tickets and food. Upon returning to the Detroit Shoppe, guests will be given time to shop and enjoy Sanders hot fudge sundae “shots.”

6 p.m. Dec. 10, Motown Museum/American Coney Island. Guests meet at The Detroit Shoppe for appetizers courtesy of Eastern Market. They tour the museum and shop in its gift shop using a $10 Motown gift card.

7 p.m. Dec. 16, Museum of African American History. Guests tour of museum and view the special exhibit “Music at the Apollo.” A reception at Cliff Bell’s follows.

The Detroit Shoppe is located next to Macy’s on the second floor (above the Apple store) of Somerset Collection North on Big Beaver Road in Troy. Guests may purchase memberships to any of the museums and institutions in the shop, and with each membership receive a $25 Somerset gift card. Call 248-816-5470. The store will be open during mall hours, visit www.thesomersetcollection.com.