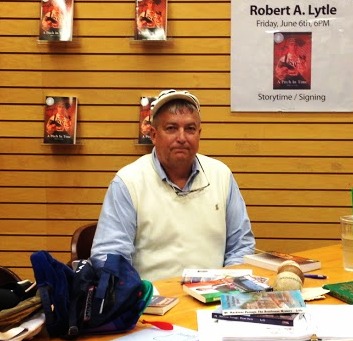 Fourteen-year-old Mac Dugan and his family have moved to Michigan from Atlanta, Georgia, disrupting Mac’s perfect world. His Southern accent makes him the butt of every classmate’s jokes. If he can just make a good showing at the Pony League baseball tryouts he will make the team and get some new friends. But he arrives at the ball field without his glove, spikes and bat. His performance is horrible, driving him further into his new-kid-in-town doldrums. He hops on his bike and rides off on the old train trail. While pedaling along he hears a crowd cheering, ”Huzzah!” Curious, he gets off his bike and runs along the trail. He trips, falls, and hits his head. When he looks up he sees an old-fashioned locomotive bearing down on him—racing along an iron track that Mac knows was removed years before. Mac stares in disbelief but manages to leap to safety.

He then notices a crowd of people gathered in a nearby meadow. Several men are dressed in odd-looking clothes and scattered about the pasture in the manner of baseball players.

One of them hits a ball in his direction. Mac catches it, glances at the ball’s odd stitching, and at the insistence of one of the men, throws it back. The man catches the ball and then tags a runner as he goes by. This sets off a tumultuous cheer from one side and groans of disappointment from the other.

Mac is welcomed by a girl, Sally Norton, whose father is the local pharmacist, organizer and second-sacker for the Rochester Grangers Baseball Club. Mac is asked to join the local’s side, as the Grangers are shorthanded. It seems that many of the town’s young men are at war in Virginia.

Mac slowly realizes the gravity of his situation. He has landed in 1863, the middle of the Civil War. His Southern accent is likely to get him accused of being a Rebel spy.

At Sally’s advice, Mac keeps his mouth shut and joins the local nine—relearning his favorite game, which is filled with rules, customs and terms totally unlike that of his time.

With the community’s shortage of helping hands, Mac is encouraged to join Mr. Norton’s family, which consists of Sally, Mr. & Mrs. Norton—and Charlie, Sally’s older brother—a Civil War veteran who lost his leg at Bull Run—and doesn’t much like Southerners.

Mac enrolls in the local school and learns that education, like baseball, is nothing like what he is used to.

The days and months pass as Mac becomes an important member of the community. He learns many lessons, first as Mr. Norton’s pharmacist assistant. Then after he earns Charlie’s trust, he becomes friends with Sally’s schoolmates, Mr. Norton’s teammates, helps put out a fire and rebuild a neighbor’s house (the site of an Underground Railroad conductor) and encounters the town bully.

All the time Sally and Mac try to find the reason for Mac’s inexplicable trip into the past and a way to get him back to the 21st century.