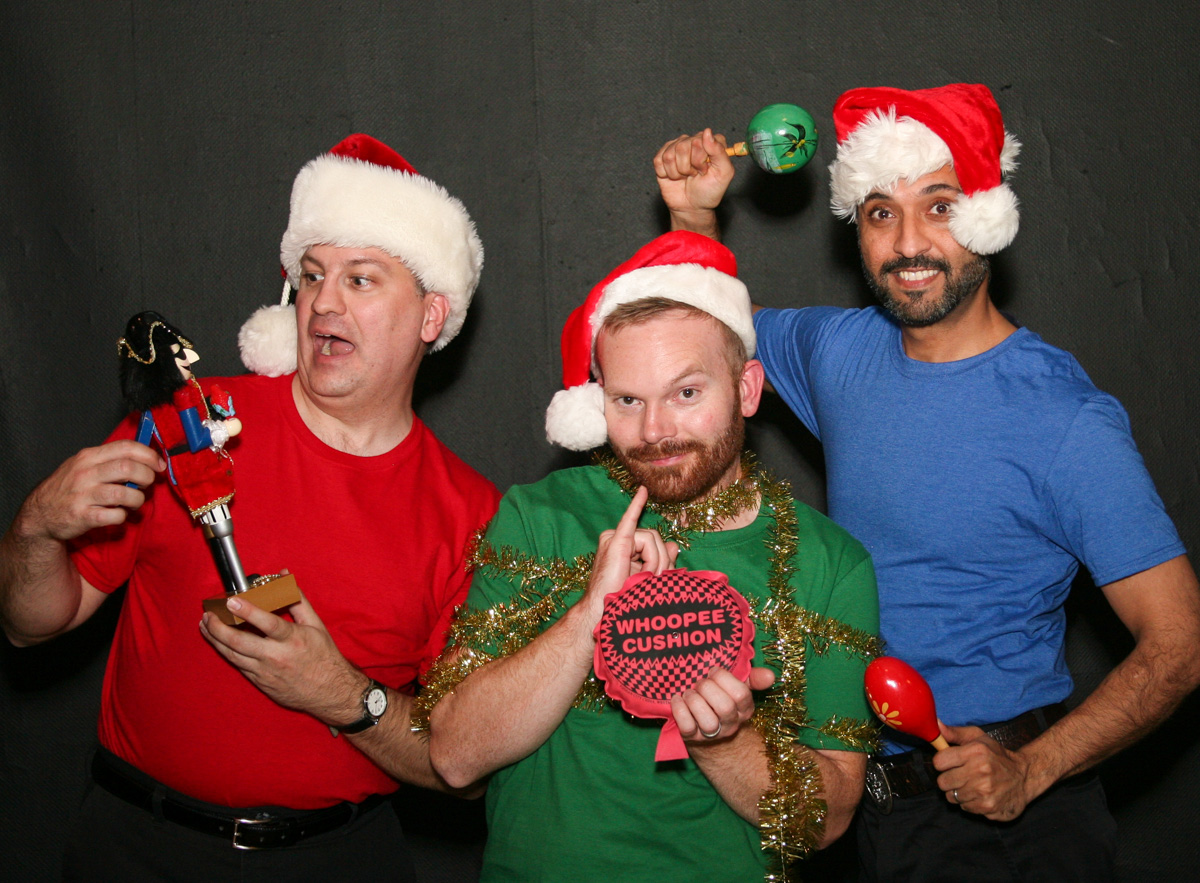 St. Dunstan’s Theatre is pleased to be one of the first community theatres in Metro Detroit to present “The Ultimate Christmas Show (Abridged)!” This fun holiday-themed show will run for two weekends: December 8 – 17, 2017.

Written by Austin Tichenor & Reed Martin, “The Ultimate Christmas Show (Abridged)” centers around an Annual Holiday Variety Show and Christmas Pageant at St. Everybody’s Non-Denominational Universalist Church, where all faiths are welcome because we’ll believe anything! But there’s a problem: none of the acts scheduled to perform have arrived! So, three members are pressed into service to perform the entire Variety Show and Christmas Pageant by themselves. An irreverent yet heartwarming trip through the holidays, this is a festive, funny physical comedy that’s a zany combination of vaudeville, improv, and song.

The three cast members will get to play many different characters as they act and sing their way through this very fast-paced comedy. St. Dunstan’s is lucky to have found a great trio of actors in Tom Arwady (Harrison Twp), Nasir Khawaja (Southfield), and Jake Zinke (West Bloomfield).

Directing this show at St. Dunstan’s is Deb Dworkin (Berkley), who is very familiar with these ‘three-men comedy’ shows, as she has directed two of them before: The Complete History of America (Abridged) and The Complete History of Shakespeare (Abridged). “I really love directing these (abridged) shows,” says Dworkin, “the dialogue is witty, the pace is fast and results are hilarious. This show has been fun at every step of the process…I can’t wait for audiences to experience it!!”

Dworkin is joined by an all-star production team including: Assistant Directors Eric Franz and Liz Schultz. Sarah Kwas is also Assistant Director/Choreographer. Stephanie Peltier and Mairo Towle are Producing. Janie Minchella is taking on the many costume changes, and Pam Richards will be providing numerous (and humorous) props. Paul Dorset will be running lights, and Chris Steinmayer will be providing sound. Connie McEwan is lending her artistic vision for scenic design and set painting. Katie Kezelian will be serving as the stage manager.

All of St. Dunstan’s Theatre’s shows this season have included an additional charity component. For this show, we are encouraging our audience members to participate in our Toys for Tots drive! Any audience member who brings in an unwrapped toy to donate will receive a special “prize” in return! The toys will be given to Toys for Tots after the show closes on Sunday, December 17.
Performance dates are December 8, 9, 14, 15, and 16 at 8pm, and December 10 and 17 at 2pm.