I was part of a group in the 70’s and 80’s that was led by five teachers: Derek Prince, Bob Mumford, Charles Simpson, Ern Baxter and Don Basham.  Charles and Bob are still alive, the others have died.  I have a high regard for each of them.  Among them, I would say Don Basham was a very calm, practical, spiritual and scriptural leader.  He was a voice needed during the charismatic renewal that sprung up in the late 60’s and early 70’s.  We had a church in Rochester and were greatly blessed when Don and Alice Basham’s son was hired as a violinist with the Detroit Symphony Orchestra and joined our church.   During his time in Metro Detroit, Glen Basham married Leelo and before long they moved on and started their family.  They were one of the most fun, lovely couples my wife Theresa and I have known.

It’s been a blessing recently to have a long distance relationship with their oldest child, Michael Basham, who is  now living in Taiwan.  Michael carries a heart for God’s Kingdom and is sorting out his life and mission after a number of years in a cult that went by the names “The Children of God” and “The Family”.  This is a group I was with myself a few days after my conversion to Jesus Christ.  They appeared, at that time to be a very gospel-centered, evangelical group consisting of, for the most part, young hippies, similar to the “Jesus People”  of that day.  It was 1969 and I was 18 years old, and I was with this group for three or four months.  My discernment antenna kicked me into action as an extra wife was being provided to their leader/founder David Berg. 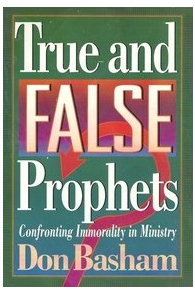 I walked away from this group that summer and during the following years it became a worldwide false cult.  I wish Michael and others would had read his Grandfather’s book on True and False Prophets.

Michael has been talking about doing an interview with me and is somewhat amazed that I knew David Berg and his children in the beginning times of their worldwide movement.  The fact that I also knew his Grandfather and the other leaders and joined this other “movement” he thought would make for a worthwhile interview.  I think he may still be scratching his head that I am now an Anglican Minister, I think others are too!