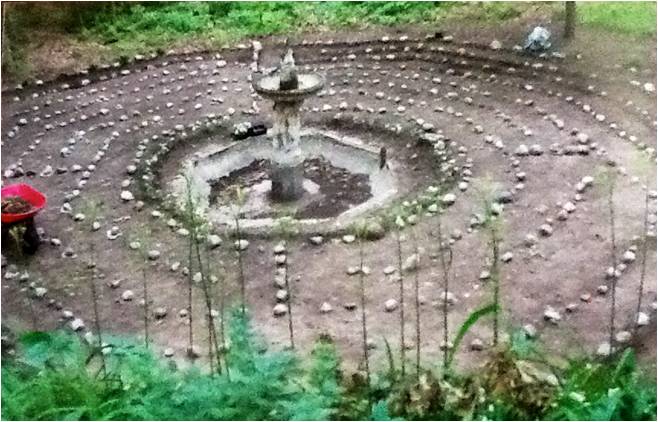 Rochester’s local pharmacist, story teller and author, Robert Lytle, has been a hit among the area’s schools. The following is a synopsis of his latest book, “Mr. Blair’s Labyrinth.”

In this adventure into the the present, past and future, two teenage brothers visit Grampa at his newly purchased, historical home. Grampa is recreating a labyrinth in a large formal garden as the boys arrive. They help him place the final stones in the area.

As they do, Grampa tells them of the home’s history. In 1929, besides the Guardian Building and the Guardian Trust Bank in Detroit, the wealthy Mr. Blair owned many acres in nearby northern Oakland County. There, he built not only an ornate house as his summer cottage, but also, by damming the nearby Paint Creek, he created a lake to water his Indianwood Golf and Country Club course.

Mr. Blair was, indeed, very wealthy.  But that was before the Great Depression when the economy throughout the world changed for the worse. The two grandsons can relate. It is now 2008 and they are living through an economic recession of their own. Money is tight for everyone. Classmates are losing their homes and moving away.

As the boys listen to Grampa, they find that, by 1935, Mr. Blair had lost everything! The lake house gradually became rundown and the property overgrown by weeds and vines to the point the house was nearly uninhabitable and the grounds impenetrable. By the time Grampa bought it, the place had gone through several owners, each doing less and less to keep Mr. Blair’s place even close to its original charm.

The boys listen to the story. Rather than going to sleep in their own beds that night, they camp in a tent by the stream. Being a hot Midsummer’s night, they hop in the river to cool off. Feeling refreshed, they decide to walk the labyrinth.

It is midnight when they begin their adventure. Each is thinking about what Grampa had said about how walking a labyrinth is supposed to help a person solve his problems—even help him get a wish. They start their walk in 2008.

They emerge minutes later and sense that something is dramatically wrong. Someone is yelling at them. The two quickly discover that they have arrived in 1935 and realize that they are no long on Grampa’s property. They are trespassers and police are on their way.

They boys run to the river, grab a canoe and flee across Lake Orion, tricking the enraged police chief. They end up in a hobo camp near a railroad track.

The boys gain the friendship of a 17-year-old hobo who takes them under his wing. He shows them the ropes of how to survive in this bleak period, first by stealing food for the Hooverville camp and then by hopping a train. Together the three go off to find work at a travelling circus. Then it’s up to Traverse City to pick cherries. Then it’s down to Watervliet for the peach harvest—always avoiding the police, looking for work, finding food and shelter—and a way back home.